Starting from January 2017, 4G smartphone manufacturers in Indonesia will be required to use at least 30 percent of local content in domestically-sold smartphones and at least 40 percent for base transceiver stations (BTS). Earlier this year the Indonesian government had issued a draft regulation on this subject and last week it was signed by Indonesia’s Communications and Information Minister, the Trade Minister and the Industry Minister. What is the impact of this new rule on Indonesia’s smartphone industry?

Initially, in the draft version, the government proposed to have at least 40 percent local components required in the manufacturing of 4G smartphones that are sold domestically. However, perhaps due to criticism from the USA and other trading partners (as the new requirement favors domestic companies over foreign counterparts) as well as the unpreparedness of local Indonesian manufacturers to meet an increase in demand for Indonesian made content, this local content requirement was eventually lowered to 30 percent for all handsets based on the frequency division duplex (FDD) technology on which local carriers build their fourth generation (4G) LTE networks. However, wireless modems using 4G LTE networks, such as Bolt, are required to have minimum local content of 40 percent.

This new mandatory minimum local content rule was primarily imposed to boost the domestic manufacturing industry in a bid to reduce dependence on imports of such products (which negatively affect the country’s trade and current account balances). Previously, the government had already introduced a measure to protect the domestic smartphone industry. In mid-2014, it imposed a 20 percent luxury-goods tax on the domestic sale of high-spec imported smartphones in an effort to limit the inflow of imported smartphones and boost the local smartphone manufacturing industry.

Failure to meet the new minimum local content requirement by January 2017 can result in the suspension of licenses and a ban on sales and distribution activities in Indonesia. As such, it is of vital importance for the globe’s main smartphone players (such as Samsung, Apple’s iPhone, Xiaomi and Polytron) to cooperate with local original equipment manufacturers or invest in local assemblies in order to tap Indonesia's lucrative smartphone market (see below). With labor costs still low (compared to China), Indonesia can also be an attractive production hub for these manufacturers. Moreover, Indonesia offers a new market for 4G technology, whereas 4G markets in the USA, China and Japan are already saturated. As such, joint venture opportunities seem promising. 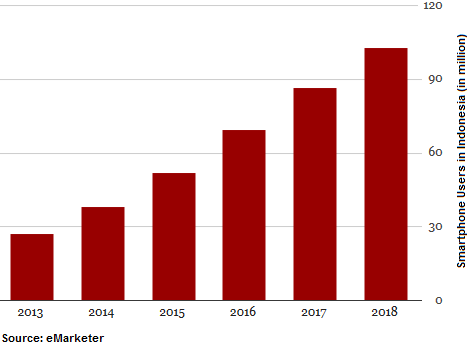 After initially being critical, most smartphone producers threw their support behind the government’s new rule. For example, Samsung Electronics Indonesia vice president Lee Kang Hyun announced that it would meet the quota as most of its Indonesia-manufactured smartphones already have local content at 20 percent. South Korea-based Samsung Electronics Co Ltd, inaugurated a factory in Bekasi (West Java) last month in response to the new rule although it emphasized that production costs become more expensive. This plant has a total annual production capacity of around 1.5 million phones and tablets.

Excluding cheap labor, production costs for smartphones manufactured in Indonesia can be higher due to imports required for certain smartphone parts. For example, imports of neodymium, found in China, can be expensive (in addition to Indonesia’s notorious infrastructure bottlenecks that significantly raise the country’s logistics costs).

In response to this new rule, various observers stated that it is not feasible for most local manufacturers (as they are unprepared to meet a sudden increase in demand for Indonesian made content) and as such will ultimately hurt Indonesian consumers. Meanwhile, the American Chamber of Commerce in Indonesia (AmCham Indonesia) expressed that it is concerned about Indonesia backing away from free-trade obligations and thus may be in violation of international trade law governed by the World Trade Organization (WTO). Furthermore, AmCham claims that the new minimum local content requirement restricts Indonesian consumers’ access to the best and new (imported) technologies and stimulate both grey and black markets for mobile cell-phones as the country currently still lacks the supply chain to produce high-quality mobile phones.

It is interesting to note that the total value of foreign smartphones sold on the Indonesian market is estimated to have reached roughly USD $5.5 billion in 2014. However, according to data from the Trade Ministry the value of smartphones legally imported into Indonesia stood at a mere USD $3.5 billion, indicating that there is a huge black market for smartphones. Similarly, around a decade ago, cellphone smuggled into Indonesia surged considerably after the government implemented high import tariffs. When this tariff was removed, smuggling immediately eased. However, when in 2013 the government implemented a 20 percent luxury tax on imported cellphones, smuggling spiked again (reportedly there were over 50 million illegal cellphones in circulation in Indonesia in 2013).

Another concern involves the lack of information on how the 30 percent local content requirement rule will be measured.

One last note, the Indonesian government is eager to enhance broadband connectivity across the nation. Earlier this year, it announced a plan to invest IDR 278 trillion (approx. USD $21 billion) for this purpose, ensuring that rising 4G smartphone demand is supported by the necessary telematics infrastructure.