Conditions in Indonesia's manufacturing industry weakened in December 2017, for the first time since July, due to renewed declines in output and new orders. As a consequence, manufacturing companies cut their staffing levels at a modest pace and reduced inventory holdings.

Flooding and other distribution disturbances (road repairs) made it more difficult for suppliers to transport raw and semi-finished items which led to slower average lead times.

As mentioned above, for the first time in three months there was a contraction in production in Indonesia's manufacturing industry. The rate of decline was in fact the steepest since July. The new orders volume declined for the first time in five months. However, the rate of contraction was marginal. Also new export orders declined in December, albeit at a modest rate.

Aashna Dodhia, Economist at IHS Markit, commented on the latest data: "Indonesia's manufacturing sector ended 2017 on a weaker footing, with the health of the sector deteriorating for the first time in five months. Latest data indicated that subdued client demand led to renewed falls in both output and new orders. Furthermore, new export orders declined for the first time since July amid reports of reduced international demand for Indonesian manufacturing goods".

"Input price inflation accelerated to the sharpest since June, linked to higher imported raw material costs emanating from the weakness of the Indonesian rupiah relative to the US dollar. In response to narrowing interest rate differentials from continued monetary policy tightening by the US Fed, currency depreciation is likely to continue over the coming months. Therefore cost pressures could intensify further as we head into 2018. At the same time, manufacturers were restricted in their ability to fully pass on higher cost burdens to customers as firms faced intensive market competition."

"On the jobs front, firms continued to reduce their staffing levels in response to weak demand conditions. On the bright side, the Future Output Index signaled the strongest degree of optimism towards the 12-month outlook since June. Nevertheless, the respective index remained below the long-run series average," Dodhia added.

Meanwhile, manufacturing activity across Asian factories finished a strong 2017 on a mixed note. While activity is at multi-year highs in Taiwan and India (as well as a surprise pick up in China), it contracted in other places. Analysts believe that robust external demand and accommodative monetary policies across Asia should help keep Asian manufacturing sectors in good shape. 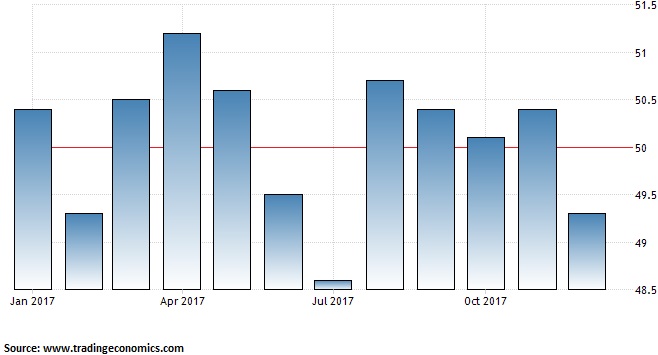