By the mid-1960s, politics and the economy of Indonesia had turned into disaster. After Independence in 1945 (and the cessation of hostilities with the Dutch in 1949), the young nation was plagued by hostile internal politics in which several political forces - consisting of the army, nationalists, Muslims, and communists - opposed each other. For over a decade, Sukarno, Indonesia’s first president, had reasonable success in keeping these forces in check by the force of his own personality. However, by the mid-1960s his failure became evident.

After the Dutch colonial power - burdened by international pressure - had ceded control of all Indonesian territories in 1949 (except for the western half of New Guinea), the young nation faced the difficult task of governance and nation-building through a parliamentary system. Soon it became clear that the nation contained various groups that all competed for political power and wanted to impose their views upon the new nation.

Previously, during the colonial period, these groups had already been present. However, they had one common enemy - the Dutch colonizers - which meant that they somewhat set aside their differences. After Independence these differences came to the fore. Through his Pancasila concept (referring to the five principles or the official philosophical foundation of Indonesia), introduced in 1945, Sukarno tried to unite these different forces within the new (and highly pluralistic) nation.

Indonesia’s Pancasila is a fusion of elements of socialism, nationalism and monotheism and functioned as the common denominator of all ideologies that were present in Indonesian society (in fact Sukarno’s successor Suharto would use this Pancasila concept as a powerful tool of repression during his authoritarian New Order government). The only group that objected to the Pancasila as formulated by Sukarno were the stricter Muslims. They wanted to add the provision that Muslims should implement Islamic Law (Shariah), which was not agreed upon by Sukarno as it would jeopardize the unity of the nation. Although containing the world’s largest Muslim population, there are millions of Christians, Catholics, Hindus and Buddhists as well as a large group of nominal Muslims in the country (who would not support the introduction of Islamic Law). 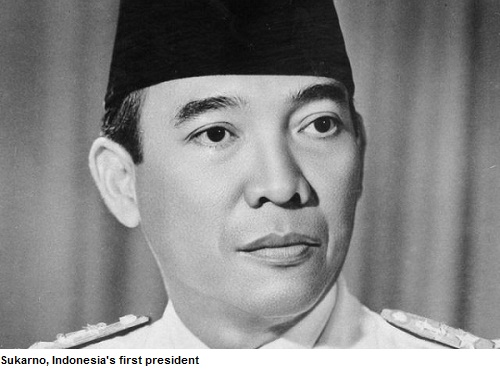 The lack of consensus among the various groups about what sort of nation Indonesia should be meant that governing the vast archipelago was a hazardous undertaking. Other issues were problematic as well. For example, the Outer Islands (blessed by an abundance of natural resources) resented the political and economic dominance of the island of Java. As a result, a series of regional rebellions occurred in the 1950s. These were the Darul Islam in West Java, a secessionist movement in the South Moluccas, and the PPRI/Permesta rebellions.

When a country’s political environment is characterized by great uncertainty and instability, it will have serious trouble to foster economic growth as the private sector is hesitant to invest. Although in the early years after Indonesian Independence there was moderate economic growth detectable, this growth soon vanished amid the political unstable context (particularly after regional rebellions and the expropriation of Dutch assets in 1957-1958). In the 1960s the Indonesian economy quickly deteriorated due to debt and inflation, while exports weakened. Foreign exchange earnings from the country’s plantation sector fell from USD $442 million in 1958 to USD $330 million in 1966. Inflation peaked above 100 percent (year-on-year) in the years 1962-1965 as the government simply printed money to fund its debt and grand projects (such as the construction of Monas). Indonesians’ per capita incomes declined significantly (particularly in the years 1962-1963). Meanwhile, much-needed foreign aid stopped flowing to the country after Sukarno refused to accept aid from the USA and pulled Indonesia out of the United Nations (UN) due to Malaysia’s admission to the UN (Indonesia opposed the creation of Malaysia in 1963). Instead he fostered closer relations with China and North Korea.

The Sukarno administration released an Eight-Year Plan in 1960 in a move to make the country self-sufficient in food (especially rice), clothing and basic necessities within a three year period. The next five years would become a period of self-sustained growth. However, the masterplan was abandoned in 1964 as the economy deteriorated and targets could not be achieved. In fact, the economy went into a downward spiral due to hyperinflation, an eroding tax base, as well as a flight from financial assets to real assets. The costly ‘confrontation’ politics against Malaysia also absorbed a significant portion of government expenditures.

The dangerous political cocktail that Sukarno had made (consisting of communists, Muslims, and the military) proved to be a ticking time bomb. Complete chaos occurred after the mysterious coup on 30 September 1965 and it was the army that came out of the chaos victoriously. Slowly General Suharto managed to take power away from Sukarno during the 1965-1967 period (in 1967 Suharto was officially inaugurated as Indonesia’s second president). One of Suharto’s top priorities was to improve economic conditions in the country. He turned to a team of economists that were trained in the USA to start a period of economic rehabilitation and recovery. In the years 1966-1970, the government managed to control inflation, re-established international relations so that much-need foreign aid could enter the country, started to rehabilitate physical infrastructure, and introduced new laws that made it attractive for foreigners to invest in the country. This would mark the beginning of Suharto’s New Order Miracle.