Foreigners who live in Indonesia's capital city of Jakarta are well aware of the horrible traffic situation. The lack of sufficient infrastructure development in combination with high car sales in recent years as well as the ever-growing population of Jakarta have resulted in complete standstills in many parts of the city, particularly on weekdays. To cover a relatively small distance in a car or taxi it can take hours, a loss of valuable time. Fortunately, there is a solution to these traffic jams.

Contrary to my experiences in Western nations, the scheduling of meetings in Jakarta has always been problematic for me, especially if the meeting is scheduled at a location not too close to my office, or worse, in an area of Jakarta that I'm less - or not - familiar with. The main problem here being the severe traffic congestion. Being Dutch I prefer to arrive on time at meetings, even though in Indonesia there exists the cultural phenomenon known as "jam karet" or "elastic time", which refers to the habit of people to arrive late for an appointment. However, this jam karet is not part of my cultural background.

Eager to arrive on time at meetings I used to depart very early, using the regular taxi services that are available in the city, such as Blue Bird or Taxi Express (the two dominating forces in Indonesia's traditional taxi services industry). During the drive, usually at a very slow pace given the traffic conditions, I would experience mood-swings: becoming annoyed due to busy traffic, then relieved as traffic congestion would somewhat clear and the taxi driver could step on the gas pedal, then annoyed again when some seconds later traffic would again come to a complete standstill, while all the time looking at my watch to calculate if I can make it on time.

The only advantage of heavy traffic when taking a taxi - except for the pleasant air conditioning and comfortable seat (compared to public transportation or a motorcycle) - is that you have time to practice your Indonesian language skills with the taxi driver and therefore get some free language classes.

When the meeting is scheduled in an area of Jakarta that I'm not familiar with it is even worse as I do not know which streets in that area are likely to be busiest (and therefore need to be avoided). Moreover, many tax drivers will be happy to take the long way or queue in busy traffic in order to let the meter running, and due to my ignorance about the area I cannot instruct them to take a certain road.

There has always been a solution to this situation: the motorcycle. In Jakarta there are thousands of ojek drivers (motorcycle taxis) waiting next to the streets to take people to their destinations. While cars and taxis usually come to a complete standstill in busy traffic, the motorcycle can often find its way through the narrow passages between cars and is therefore a much faster option when traffic is congested.

Living in the age of Internet and rapidly developing telecommunication technology the traditional transportation services in Indonesia - such as taxi services and the ojek drivers - have had to face newcomers who proved to be tough competitors. These newcomers are the app-based transportation services. Although I was initially somewhat hesitant to use app-based transport services such as Go-Jek or GrabBike, I have become a loyal customer.

To me there are two main advantages of these app-based motorcycle taxis compared to the traditional ojek or taxi. Firstly, when ordering the motorcycle taxi on your mobile device you will need to confirm the location of departure and destination. The online application then calculates the price. Therefore, there is a fixed (and cheap) price. This is a great advantage. Many taxi drivers will not take the fastest route because they want the meter to go as high as possible, implying that you will not only lose money but also valuable time. Meanwhile, when bargaining with the traditional ojek drivers for the price, foreigners will usually end up paying way too much for the drive.

When the price is already fixed, however, the Go-Jek or GrabBike driver will be eager to take the fastest possible route, because it is in their interest (to save fuel costs), so you will save both time and money. Even in case the Go-Jek driver is lost, which happens occasionally (even though they use online transportation maps that show the fastest route), the additional distance that is traveled comes at the expense of the driver's income. This fixed price system is great for the consumer and perhaps the regular taxi services (including Blue Bird and Taxi Express) should think about adopting this system.

The second advantage is that the motorcycle taxi will pick you up at your location when you use an app-based transportation service. Therefore, no need to walk around in search of a motorcycle taxi or regular taxi.

However, there are also disadvantages when taking app-based motorcycle taxis. For example, it is not as comfortable as sitting in an air-conditioned taxi or car. In fact, you will most likely sweat a lot, not only due to the warm climate but also due to the many exhaust gases that you will feel while the motorcycle driver is busy finding its way through busy traffic (and for health reasons you may want to wear a mouth cap).

Moreover, although being very efficient means of transportation, it may not make a great impression to your Indonesian clients or business partners when they see you arrive using a motorcycle taxi. Jakarta's business community is a highly materialistic world and therefore it may raise some eyebrows, especially seeing a foreigner using a motorcycle taxi.

Meanwhile, public transportation in Jakarta is uncomfortable. For example, the Trans-Jakarta bus is often unreliable and overcrowded and you usually still need additional transportation services (or walk in the city's warm weather conditions) to reach your final destination. However, there are some ambitious government-led infrastructure development projects under construction currently (for example the MRT system). Still, I may remain a loyal customer of Go-Jek.

THE TRAFFIC IN JAKARTA IS AMAZING.
LOVE JAKARTA 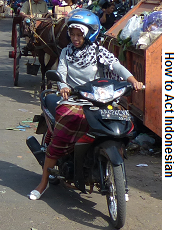