Overall, low crude oil prices are problematic for stock markets as low prices indicate the world economy is not expanding on full throttle. This curbs investors' risk appetite. Particularly those companies that are active in the oil industry (or in related industries) will likely face declining share prices. However, there are also positive effects of low oil prices. For example consumers' purchasing power should improve because prices at the gas pump are lower, while some companies can curb operational costs. Hence, consumer and transportation stocks should actually benefit from low oil prices.

Over the past decade oil prices have shown a very volatile performance. From a record high of around USD $155 per barrel in June 2008 they plunged dramatically in the next couple of months. After this decline oil prices recovered and stabilized in the range of USD $80 and USD $120 per barrel in the years 2010-2014. Then, another dramatic fall occurred between late-2014 and January 2016, touching a low of USD $26 a barrel due to the supply glut and weak demand. Then, another period of recovery and stabilization took place up to the present day as prices remain in the range of USD $45 - USD $50 per barrel, but still more-or-less a decade low (see table below).

Moreover, analysts see oil trading around USD $50 per barrel in the foreseeable future due to subdued global economic growth, the US shale oil boom, while the OPEC has had difficulty to cut oil production significantly. Moreover, with China's manufacturing growing at a rather bleak pace at the moment, there should be subdued demand for oil from the world's second-largest economy. 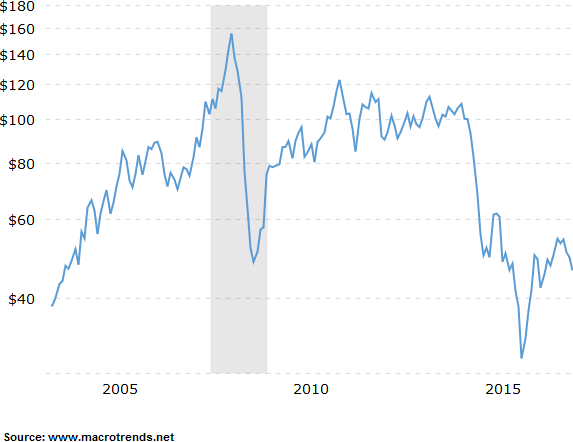 Which Companies Listed on the Indonesia Stock Exchange are Negatively Affected?

With oil prices expected to remain subdued over the next couple of years, listed oil and gas producers will encounter challenges.

For example Medco Energi Internasional. Over the past five trading days the company's shares fell 17.63 percent, in line with the oil price's +6 percent drop over the same period. In the case of Medco, investors also did not respond well to its new plan to conduct a 1:4 stock split (its board's effort to boost liquidity and make the share price more attractive). It is worth noting that shares of Medco surged 83.33 percent since the start of 2017 (the company even came under a special radar of the Indonesia Stock Exchange due to "unusual market activity") on the back of positive sentiments that possibly stem from the company's strategy to expand heavily (through acquisitions) amid the low oil price environment and its successful effort to turn a net loss into net profit in full-year 2016.

Which Companies Listed on the Indonesia Stock Exchange are Positively Affected?

But there are also companies that benefit from low oil prices as they can curb operational costs. In fact, due to people's growing spending power (as consumers have to pay less at gas pumps) some companies can expect to see rising sales due to structurally low oil prices.

We detect two categories of companies that would not complain if oil prices remain low: land transportation and consumer goods companies.

Indonesia's land transportation sector includes companies such as taxi operators Blue Bird and Express Transindo Utama (that have a bigger enemy in the popular ride-sharing apps) or transportation services companies Adi Sarana Armada, Eka Sari Lorena Transport, WEHA Transportasi Indonesia or Zebra Nusantara. For all these companies a big chunk of operational costs are caused by the use of fuel.

And then there is the one airline that is listed on the Indonesia Stock Exchange: national flag carrier Garuda Indonesia. Although on the one hand it should benefit from the low jet fuel price, there is the problem of foreign exchange losses for this state-controlled airline. Oil is denominated in US dollar and over the past couple of years the rupiah has weakened against the greenback.