In line with expectations, Indonesia's inflation rate eased to 2.79 percent year-on-year (y/y) in August 2016, from 3.21 percent (y/y) in the preceding month. Consumer price inflation in Indonesia fell on the back of declining prices after the Islamic celebrations of Ramadan and Idul Fitri ended in July. On a monthly basis, Indonesia recorded deflation of 0.02 percent (m/m) in August. Meanwhile, the manufacturing sector of Indonesia turned positive again.

August deflation was particularly caused by easing food prices and declining prices of transportation, communication and financial services. This is a normal phenomenon in the post-Ramadan and Idul Fitri period. These Islamic celebrations give rise to increasing consumption of food items (due to the many dinner parties), rising transportation costs (as millions of people travel from the cities back to their places of origin; a traditional called mudik), while SMS messages and other telecommunication traffic peaks. This year Ramadan and Idul Fitri fell in the period from June to mid-July. Starting from the second half of July consumption retreats, hence prices retreat accordingly.

Indonesia's headline inflation in August 2016 (2.79 percent y/y) is the lowest inflation rate since December 2009 (2.78 percent y/y). In Indonesia inflation has been particularly high between 2013 and 2015 due to administered price adjustments (fuel subsidy reforms).

The central bank of Indonesia set its 2016 inflation target in the range of 3 - 4 percent (y/y). Given low inflation so far this year, we expect to see inflation at 3 percent (y/y) at the year-end. Controlled inflation provides a suitable context for further monetary easing although pressure on the rupiah have increased amid heightening speculation about a looming US interest rate hike.

Expansion in Indonesia's manufacturing sector in August was caused by a rebound in order books (which led to a mild increase in output). Meanwhile, Indonesian manufacturers offered lower selling prices in a bid to secure new contracts (despite being plagued by rising purchasing costs, especially for metals, chemicals, plastic and textiles). Despite an increase in buying level was detected, employment fell in August due to excess capacity. The decline in employment was the fastest in 2016 so far. 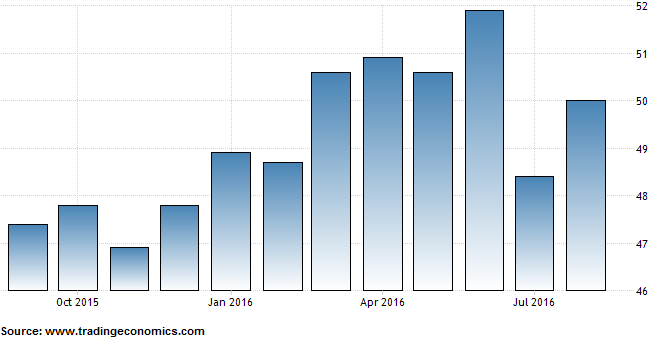 Pollyanna De Lima, Economist at IHS Markit, stated: "the return to growth of Indonesia's manufacturing sector in August is a positive sign, especially as July's decline raised concerns regarding the start of a new downturn. Survey data indicate that firms are undoubtedly cautious about the short-term outlook for new work and production, as highlighted by another reduction in payroll numbers."

De Lima continued: "August’s increases in output and new orders lay a platform that companies will hope to build on in coming months should improvements in client demand strengthen. IHS Markit expects GDP growth in Indonesia to accelerate from the post-recession low of 4.8 percent in 2015 to 5.1 percent in 2016, with lower interest rates anticipated to support private consumption."