In the latest update of its flagship publication Asian Development Outlook 2015, the Asian Development Bank (ADB) said softer economic growth prospects of China and India in combination with slow recovery in the major industrial markets were reason why the ADB has cut its economic growth forecast for developing Asia in 2015 and 2016. The ADB now estimates GDP growth in developing Asia at 5.8 percent (y/y) in 2015 and 6.0 percent (y/y) in 2016, down from previous GDP growth forecasts of 6.3 percent (y/y) for both years.

The ADB cut its growth forecast for China for the second time in just over two months to 6.8 percent (y/y) in 2015 and 6.7 percent (y/y) in 2016, down from 7 percent and 6.8 percent, respectively. Despite several interest rate cuts conducted by China’s central bank as well as providing fiscal stimulus, the world’s number two economy is bound to grow at its slowest pace in 25 years due to a slowdown in investment and weak exports. Reduced Chinese appetite for energy, metals and other commodities will impact negatively on commodity-focused export markets in Southeast Asia including Indonesia.

Despite expected moderation in developing Asia, the ADB believes that this region will still be the largest contributor to global economic growth. However, the ADB advises that some of developing Asia’s countries will implement macro-prudential regulations (including limiting reliance on foreign currency borrowing) in order to soften the impact of currency pressures and concerns about capital outflows (amid looming higher US interest rates).

The ADB states that "a strengthening US dollar poses a threat to Asian companies with large foreign currency exposure, with data showing that the share of foreign currency debt among firms in Viet Nam, Sri Lanka, and Indonesia exceeds 65%." 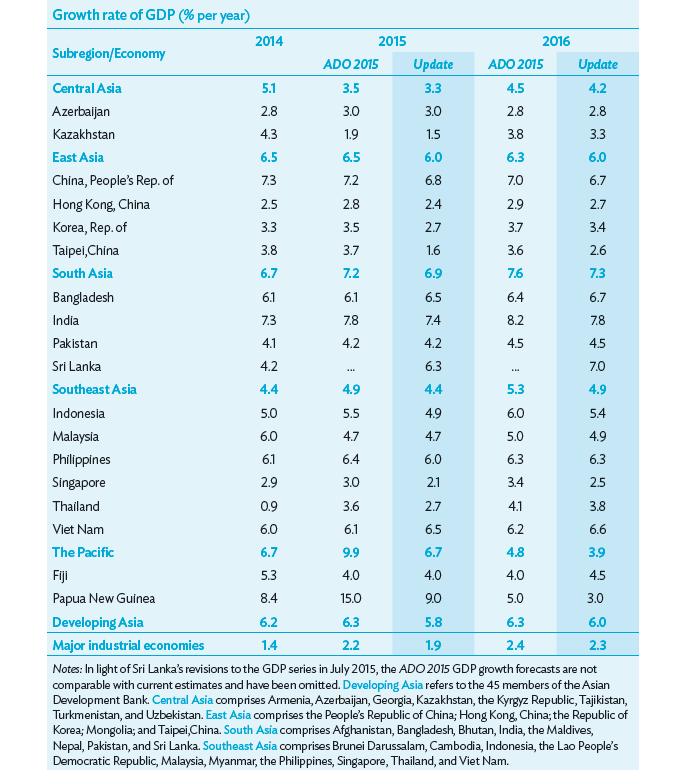