Amid Indonesia’s slowing economic growth as well as looming higher prices of subsidized fuels (which will cause accelerated inflation and declining purchasing power), domestic car sales in Indonesia have fallen 6.3 percent to 104,916 units in October 2014 from the same month last year according to preliminary data from the Indonesian Automotive Industry Association (Gaikindo). Cumulatively, car sales reached 1.04 million units in the first ten months of 2014, a slight 1.6 percentage point increase from the same period last year.

Despite the weaker conditions for the car market in Southeast Asia’s largest economy (these conditions include higher interest rates, a depreciating rupiah currency, the looming subsidized fuel price hike, and the slowing economy), car sales managed to climb slightly year-on-year in the January-October 2014 period due to sales of the popular low-cost green car (LCGC) as well as the new low multipurpose vehicles (LMPV).

Sudirman Maman Rusdi, Chairman of Gaikindo, announced that the LCGC accounted for 13 percent of total retail car sales this year so far. He added that he expects this figure to rise to 14-15 percent in 2015. This LCGC has been a key driver of domestic car sales in Indonesia since its introduction on the Indonesian market in September 2013. The LCGC is a cheaper and fuel-efficient option for Indonesian consumers. Up to the time of writing there have been five LCGC models released in Indonesia under the low carbon emission (LCE) program. In 2013, the Indonesian government started to provide tax incentives to those companies that produce this type of cars. Through this program the government aims to limit domestic fuel consumption (thus limiting the country's wide current account deficit) and turn Indonesia into the regional LCGC production hub ahead of the implementation of the ASEAN Economic Community (AEC) in 2015. The AEC will turn the ASEAN region into a single market and production base. 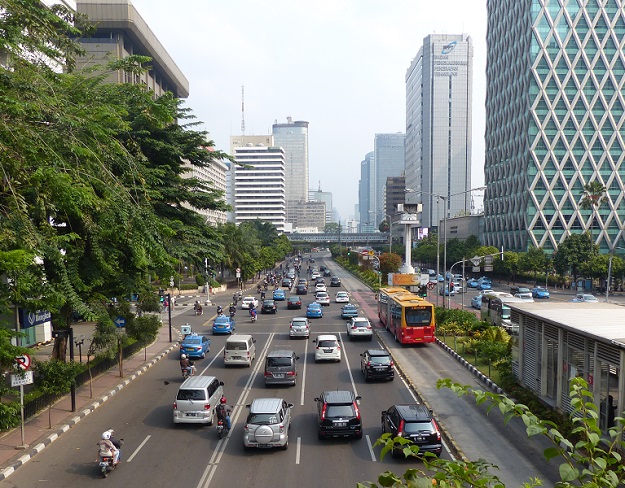 However, the Gaikindo Chairman also stated that Indonesian car producers are cautious about an apparent wide gap between the country’s whole sales and retail sales. Reportedly, this gap has reached up to 54,000 units (with nearly 17,000 cars left over from last year’s car stocks). As a result, Indonesian car manufacturers have not only adjusted productions rates to the new situation but are also offering discounts in an attempt to boost sales (these discounts are mainly for medium-class cars). Rudi explained that the oversupply of cars on the Indonesian market is caused by major expansion (resulting in the higher annual production capacity of about 1.98 million car units currently) in the car industry since 2012 (when forecasts for Indonesia’s economic growth and car sales were still very optimistic). However, as the economy has been slowing amid a sluggish global economy (impacting on Indonesian exports) as well as internal rebalancing, Indonesia’s car sales have - in fact - been declining since 2012.

Gaikindo expects that Indonesia will produce a total of 1.4 million cars in 2014, of which 1.2 million will be sold on the domestic market. The remaining 200,000 cars will be exported. A sales figure of 1.2 million cars in 2014 implies that car sales will be rather stagnant from the 1.23 million sold cars last year. However, over the next couple of years Rusdi expects that Indonesian car sales will increase to 1.7 million sold units per year as the country’s GDP growth remains robust at a pace of +5 percent year-on-year.

Similarly, Indonesia’s motorcycle sales have declined for the same reasons. A total of 6,760,557 motorcycle units were sold in the first ten months of 2014, only a 3.5 percentage point growth from the same period last year. Both car and motorcycle sales inform about consumer confidence.