While one month ago we read (in Indonesian media) that Indonesian President Joko Widodo vowed no increase in prices of subsidized fuels before the end of 2022, the situation suddenly changed. Based on reports in Indonesian media in the second half of August 2022 there were growing signs that the government was busy preparing a significant increase in prices of subsidized fuels (involving Pertalite and Pertamax gasoline fuels as well as automotive diesel oil) to safeguard a healthy budget balance for the government.

The root of the problem is that global crude oil prices have increased significantly since the second quarter of 2020 (after prices had plummeted to record lows amid the unprecedented decline in production, consumption, and transportation that was triggered by the COVID-19 crisis). The sudden rebound in economic activity (while at the same time logistics and supply channels were still in disarray) caused prices of oil and gas to recover sharply, which was sped up by the Russo-Ukrainian war.

When global crude oil prices rise, while subsidized fuel prices are left unchanged at home, it causes a widening gap between (1) market prices (based on factors such as production costs and the forces of supply and demand) and (2) actual prices at the pumps. The widening deficit then needs to be compensated by the government (that collects most of its funds through taxation), either directly or through the fully state-owned companies Pertamina and Perusahaan Listrik Negara (PLN).

Let’s take a look at a couple of charts and tables to illustrate the above. In the crude oil price chart we can see that West Texas Intermediate (WTI) rose from USD $21.78 per barrel in April 2020 (when the COVID-19 crisis was at its peak) to USD $116.98 per barrel in May 2022. After this recent peak in May 2022, prices did come down a bit but remain not far from the USD $100 per barrel threshold. 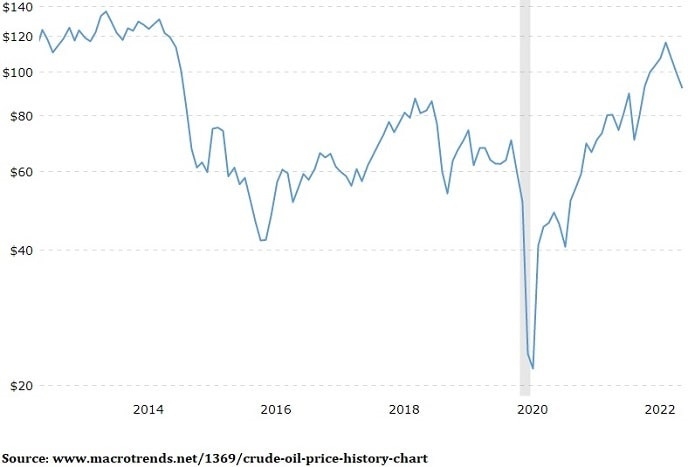 The table above shows the difference between the prices Indonesians pay at the gas pumps and the economic price of one liter of subsidized fuel. At the right side of the table we can see that for each liter of Pertalite fuel consumed, the government had to pay IDR 6,800 (approx. USD $0.46) to make up for the difference. For one liter of diesel oil the gap was even IDR 8,800 (approx. USD $0.59) per liter. This would not be a problem if few Indonesians use these subsidized fuels. However, together, the three fuels listed in the table account for around 95 percent of fuel consumption in Indonesia. That is a huge number, and therefore causes serious fiscal pressures.

Over the past two decades or so, an increasing number of domestic and international institutions, including Indonesia Investments, have expressed criticism on generous energy subsidies offered by the Indonesian government, especially since Indonesia turned into a net oil importer since the mid-2000s, with an ever widening mismatch between declining domestic oil production and growing domestic oil consumption amid the strongly expanding national economy. For almost 60 percent of fuel needs, Indonesia now depends on imports (which amounts to around 1.6 million barrels of oil per day).

This growing mismatch is untenable. Moreover, the more public funds are spent on cheap energy prices for the people and businesses, the fewer funds are available for more productive public programs in the context of Indonesia’s economic and social development. And another often-used argument against energy subsidies is that this policy particularly benefits the nation’s well-to-do households instead of the poorer households.

The August 2022 report (an electronic report) can be ordered by sending an email to info@indonesia-investments.com or a message to +62.882.9875.1125 (including WhatsApp). 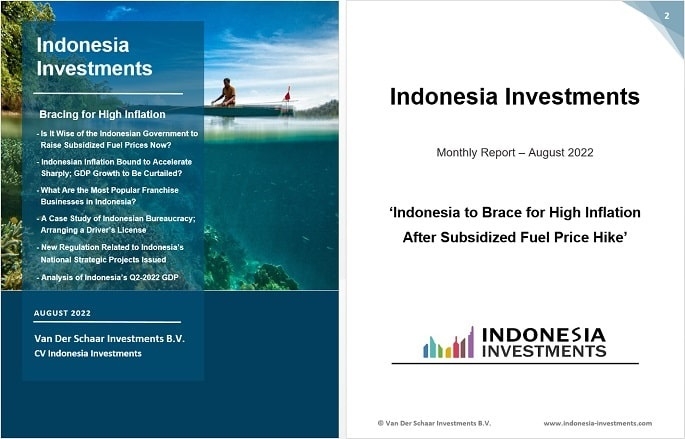