It was well back during the ‘Oslo Climate and Forest Conference’, held in Norway on 26-27 May 2010, when Indonesia and Norway announced a partnership through which Norway would grant (the equivalent of) USD $1 billion in aid to Indonesia for forest preservation and climate control.

When we talk about greenhouse gasses, one of the countries that plays a key role is Indonesia. Not only because it is home to vast tropical forests (soaking up massive amounts of greenhouse gases) that are threatened by agriculture cultivation (which includes the habit of using fire to clear land; something that often escalates), but also because Indonesia – amid robust economic growth – has turned into an increasingly bigger emitter of carbon dioxide.

A year earlier, in 2009, Indonesia had pledged to reduce greenhouse gas emissions by (at least) 26 percent by the year 2020, or, as much as 40 percent provided it could count on international help. Both were, unfortunately, too ambitious targets. Later, based on the Paris Agreement treaty that was signed in 2015, the central Indonesian government changed its pledge to a 29-41 percent reduction in emissions by 2030. This, too, seems a too ambitious target considering the development of renewable energy goes at a very slow pace in Indonesia.

Norway’s USD $1.0 billion donation package would be transferred to Indonesia in stages, pending progress booked in Indonesia in terms of slowing its emissions from deforestation (which was agreed to be reviewed by an independent group). Part of those funds were also set aside for certain pilot projects under a United Nations (UN)-backed forest carbon offset scheme that was called ‘Reduced Emissions from Deforestation and Degradation’ (REDD).

Read the full article in the September 2021 edition of our monthly report. This report can be ordered by sending an email to info@indonesia-investments.com or a message to +62.882.9875.1125 (including WhatsApp).

Price of this (electronic) article on the Ending of the Indonesia-Norway Deal: 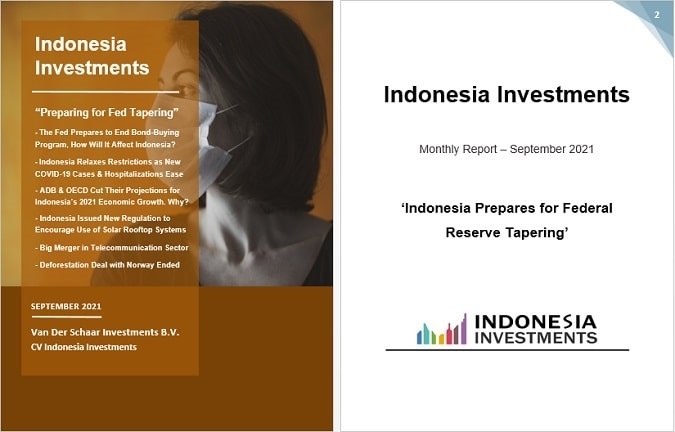