The performance of Indonesian stocks was in line with the overall trend of Asian stocks today. Most Asian stocks finished higher, supported by solid corporate earnings reports released by giants Caterpillar and 3M. Meanwhile, the Dow Jones Industrial Average had given a clear direction overnight, after the Donald Trump administration reiterated promises of tax reform. The Dow Jones posted its biggest gain in more than a month on Tuesday, setting a new record closing high.

Investors clearly had appetite for risk today as reflected by gold extending overnight losses, while the US dollar maintained near a three-month high versus the Japanese yen. Meanwhile, crude oil prices kept steady around four-week highs after oil giant Saudi Arabia pledged its determination to end the supply glut.

A sudden surge in the benchmark index occurred in the last 30 minutes before closing. This is possibly attributable to psychology (passing beyond the 6,000 boundary). Meanwhile, earlier today, Indonesian parliament had approved the government's proposed 2018 state budget. 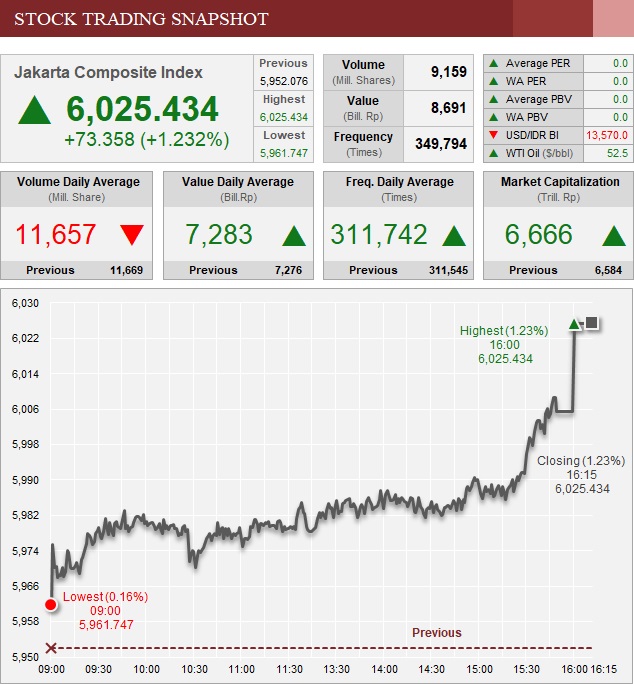 The Indonesian rupiah, however, depreciated 0.33 percent to IDR 13,578 per US dollar on Wednesday (25/10) based on the Bloomberg Dollar Index, the weakest level since early June 2016. Most of Asia's emerging market currencies fell against the US dollar. The performance of the rupiah, however, was among the weakest today.