Despite several persistent challenges, geothermal energy remains a very interesting (and relatively environmentally friendly) power source for Indonesia. It is estimated that Indonesia is home to 40 percent of total global geothermal energy potential. But as impressive as that sounds, the country only uses a fraction of the potential. So, let’s take a look at recent developments in terms of geothermal power in Indonesia.

(1) Renewables are much more environmentally friendly (which is important in the context of the 2015 Paris Agreement on climate change, and for achieving the sustainable development goals by 2030);

(2) Fossil fuels such as crude oil, coal and natural gas are (eventually) exhaustible natural resources, and therefore people cannot depend on them forever (moreover as they will become scarcer, they will become more expensive), and;

(3) Indonesia has a traditional deficit in its oil and gas trade balance because it needs to import costly fuel and crude oil as domestic production cannot meet domestic demand. This deficit burdens not only the trade balance, but also the current account balance and the rupiah exchange rate (while also undermining portfolio investors’ confidence in Indonesia’s economic fundamentals). So, energy self-sufficiency is placed high on the agenda of the Indonesian government (being dependent on other countries for the energy supply indeed entails certain risks).

Per end-2020, Indonesia’s (combined) renewable energy capacity stood at around 10,467 MW. By the end of 2021, the Indonesian government targets to have raised total capacity of renewable energy to 11,373 MW, thus contributing 14.5 percent to total power generation in Indonesia (which remains dominated by coal, oil and gas).

[1] Indonesia is having a hard time meeting people’s and businesses’ power and electricity demand. Amid economic growth and population growth, demand for power rises strongly across Indonesia (although the COVID-19 crisis has – probably temporarily – disturbed this trend) but an adequate increase in the supply of power has been lagging behind; something that disrupts the country’s economic and social development (hence power outages remain a frequent phenomenon).

Read the full article in the June 2021 report. This report can be ordered by sending an email to info@indonesia-investments.com or a message to +62.882.9875.1125 (including WhatsApp). You can also order this article separately. 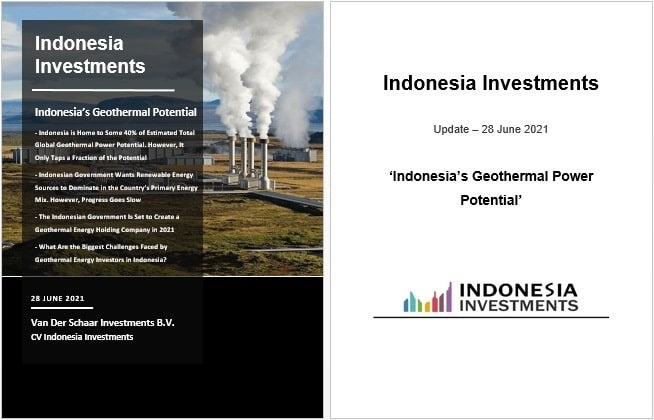