The Asian Development Bank (ADB) announced that it cut its 2015 and 2016 economic growth forecasts for both China and other developing Asian countries due to the persistent economic slowdown in the world’s second-largest economy. China’s economic expansion is projected to reach 7 percent (y/y) in 2015 and 6.8 percent (y/y) in 2016. Both these outlooks were down 0.2 percentage point from the ADB’s previous projection. Due to the size of China’s economy, economic slowing will drag down growth in the whole Asian region.

The ADB cut its 2015 growth forecast for Developing Asia to 6.1 percent from 6.3 percent previously, amid slower-than-expected economic activity in the United States (US) and China, according to the newly released Asian Development Outlook Supplement 2015. In this supplement, the ADB also projected 2016 gross domestic product (GDP) growth for the Asian region to slow to 6.2 percent, down from the 6.3 percent forecast previously.

ADB Chief Economist Shang-Jin Wei said “Slower growth in China is likely to have a noticeable effect on the rest of Asia given its size and its close ‎links with other countries in the region through regional and global value chains. While weaker-than-expected external demand, a declining working age population, ‎and rising wages, have contributed to a slower rate of growth in China, reforms aimed at improving labor market flexibility and capital allocation to the most productive firms are needed as they can also help to raise the growth rate.”

Persistent softness in the major industrialized economies (US, Japan, and the Eurozone) will contribute to the slowdown in East Asia as a whole, with growth now expected at 6.2 percent in 2015, down from 6.5 percent in an earlier forecast.

Although consumption growth remains strong in China, investment growth has continued to decelerate. The report further said that the financial sector is also expected to contribute less to China’s growth after the recent stock market correction, although the drop in stock prices is unlikely to have much impact on consumption. Past Wednesday (15/07), Chinese authorities announced that the country’s economy grew 7 percent (y/y) in the second quarter of 2015, flat the previous quarter and in line with estimations. However, it was the slowest growth rate it had experienced since 1990. 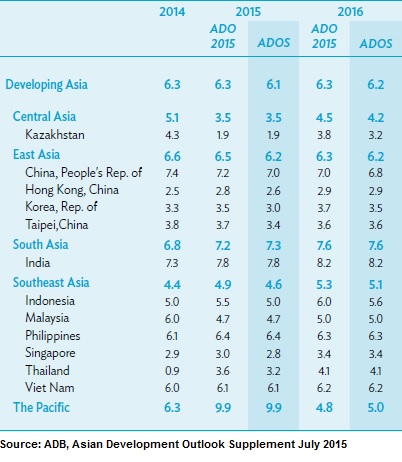 Southeast Asia will see slower-than-previously forecast growth of 4.6 percent for 2015, weighed down by lower-than-expected first half performances in Indonesia, Singapore, and Thailand. In 2016, the sub-regional economy is projected to expand 5.1 percent, below the 5.3 percentage point previous estimation.