After six years of steady decline, the Indonesian rupiah is likely to have appreciated against the US dollar at the end of 2016. So far this year, the currency of Indonesia has appreciated 4.8 percent to IDR 13,126 against the greenback (Bloomberg Dollar Index) supported by capital inflows, particularly into government bonds and stocks as well as the delay in further monetary tightening in the USA. Although the rupiah should depreciate a bit as we go towards the end of the year, it is set to finish the year at a stronger level than it started.

Although a September 2016 Fed Funds Rate hike seems off the table (at least - reading the Federal Reserve's July minutes - Fed officials seem to disagree about the timing of higher interest rates), the US central bank is still expected to tighten its monetary policy later this year, a move that will surely lead to capital outflows from emerging markets, including Indonesia. Rising US dollar demand ahead of - and shortly after - another US interest rate hike will put pressure on the Indonesian rupiah and therefore the rupiah is estimated to end the year around the level of IDR 13,300 per US dollar, slightly weakening from its current position.

There have been a number of domestic factors that contributed to inflows into Indonesia so far this year. Investors have been positive about Southeast Asia's largest economy due to the country's improving economic fundamentals: inflation has eased to between 3 - 4 percent (y/y), the current account deficit is stable, the nation's GDP growth finally showed a good sign of acceleration in Q2-2016, while President Joko Widodo has been eager to implement various reforms through economic policy packages, the tax amnesty program and cabinet reshuffles.

Although Widodo has launched a series of reforms, not all of these reforms have had the success that was hoped for. Weak cooperation and coordination between the central and regional governments have somewhat undermined the success of the 12 policy packages that have been unveiled since September 2015. Similarly, the tax amnesty program has experienced a very slow start. During the first month, the nine-month program only achieved 0.4 percent of the government's target. So far, only IDR 1.24 trillion (approx. USD $95 million) in offshore assets have been repatriated into Indonesia under the program. Earlier, Indonesian authorities stated that they expect the peak of tax declarations and asset repatriations to occur around October. However, the slow start of the program gives ample room for concern.

Indonesia's tax revenue is not only plagued by low commodity prices and sluggish profit of companies amid the economic slowdown between 2011 and 2015, but also by the structural low tax compliance. The nation's tax-to-GDP ratio is only around 12 percent, among the weakest worldwide. 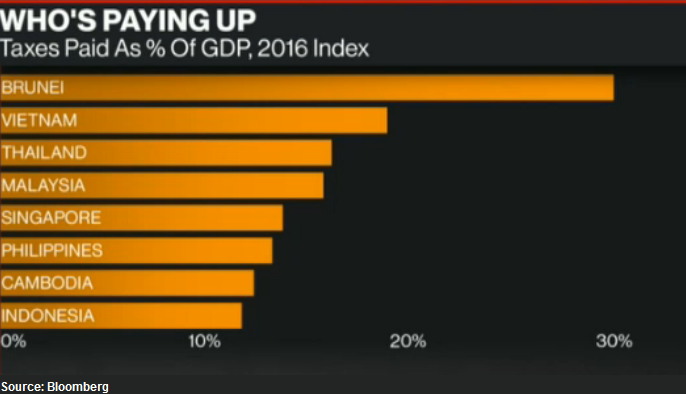 At Bank Indonesia's August policy meeting, which is concluded today, the central bank is expected to cut the benchmark interest rate by 25 basis points, a move that provides some deflationary pressures on the rupiah. Moreover, the central bank will adopt a new benchmark monetary tool at this meeting: the 7-day reverse repurchase rate.

Overall, Bank Indonesia is expected not to allow too much rupiah appreciation as that could exacerbate Indonesia's already weak export performance.