On Tuesday (23/06) Asian stock indices extended gains on optimism that debt-ridden Greece will not default and stays within the Eurozone. Although Eurozone leaders reminded that there is still work to be done before an agreement can be reached between Greece and its creditors, markets are confident that the deal is only a matter of time. However, similar to yesterday, Indonesia’s benchmark stock index did not follow this global positivity and instead declined 0.44 percent to 4,937.65 points.

On Monday (22/06), the Greek government presented new proposals to the Eurozone leaders in a bid to avert a Greek exit (Grexit) from the euro. As a result indices across the world rose. Wall Street performed well with the Dow Jones Industrial Average and Standard & Poor’s 500 Index gaining 0.6 percent, each, and Nasdaq climbing 0.7 percent as a result on renewed optimism about the Greek debt issue. Positive US indices were part of the reason why Asia opened (and stayed) in the green zone on Tuesday, followed by European indices. 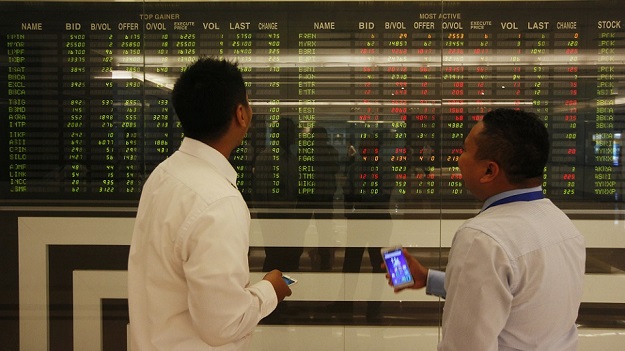 Even the Shanghai Composite Index, which plunged 13 percent last week on concern about a bubble inflating in local stocks (as investors have borrowed heavily this year to invest in these stocks), ended up 2.19 percent on Tuesday. Although China’s manufacturing activity contracted for the fourth consecutive month in June (the preliminary HSBC Purchasing Managers' Index came in at 49.6), the result was better-than-expected and the highest in three months. Still, this result indicates that China’s economy continued to slow in 2015 despite three interest rate cuts and other government measures to boost lending in the country’s banking sector and the housing market. In the first quarter of 2015, the economy of China grew 7.0 percent, the weakest level in six years. Last year, China’s economy expanded 7.4 percent, the weakest pace in nearly a quarter of a century.

As mentioned above Indonesia’s benchmark Jakarta Composite Index did not follow global positive sentiments. Even an appreciating rupiah failed to support Indonesian stocks. According to the Bloomberg Dollar Index, the rupiah appreciated 0.38 percent to IDR 13,255 per US dollar in line with other Asian currencies as the Federal Reserve has not confirmed whether to raise US interest rates by September in its latest policy meeting.

Investors may be concerned about expected high inflation in June (0.6 - 0.7 percent month-to-month or 7.4 percent year-on-year). Moreover, several macroeconomic assumptions have been revised down by the central government and central bank, implying that accelerating economic growth may not yet be possible in the short-term.