A new large mosque - named Hasyim Asy'Ari Grand Mosque - was opened on Saturday (15/04) on Jalan Daan Mogot in West Jakarta. At the inauguration Indonesian President Joko Widodo emphasized the new mosque has to become a friendly and moderate Islamic symbol in Jakarta and Indonesia, acknowledging the diversity and pluralistic nature of the country, and strengthening the spirit of moderate and tolerant Islam. Although Indonesia has a clear Muslim-majority population, it is also home to millions of Christians, Catholics, Hindus and Buddhists.

The new grand mosque is named after Hasyim Asy'Ari, national hero and founder of Indonesia's largest Muslim organization, the Nahdlatul Ulama (NU) in 1916. Earlier, the Jakarta administration visited the house of Hasyim's grandson, Salahuddin Wahid (commonly known as Gus Sholah), to ask his approval to name the mosque after his late grandfather. Salahuddin Wahid is the younger brother of former President Abdurrahman Wahid (Gus Dur). The NU currently has around 60 million members.

The Hasyim Asy'Ari Grand Mosque is fully founded, funded and operated by the Jakarta administration. The mosque is situated on 17.8-hectares of land and can accommodate up to 16,000 people. Construction of the mosque, which was launched in 2013 (by then-governor Widodo), cost an estimated IDR 170 billion (approx. USD $12.8 million). 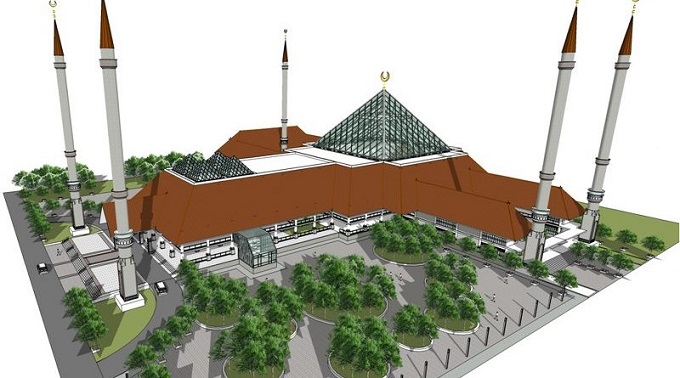 The inauguration of the Hasyim Asy'Ari Grand Mosque was originally scheduled for Sunday (16/04). However, it was suddenly moved to Saturday (15/04) to fit President Joko Widodo's schedule. Rumor has it that the move is related to local politics. Incumbent Jakarta Governor Basuki Tjahaja Purnama (better known as Ahok) returns to his office on Sunday after taking obligatory leave for the gubernatorial election (the second round is scheduled for 19 April 2017). If the mosque's inauguration would be held on Sunday, then Ahok would most likely need to be present at the opening. However, considering he is currently standing trial on blasphemy charges this could evoke negative emotions.

After the opening of the Hasyim Asy'Ari Grand Mosque, there are now three big mosques in Jakarta. The other two are the Istiqlal Mosque and Sunda Kelapa Mosque, both in Central Jakarta.