Amid falling output and declining new orders as well as sharply rising input costs, Indonesia's manufacturing activity contracted again in February 2017. The Nikkei Indonesia Manufacturing Purchasing Managers' Index (PMI) fell to a reading of 49.3 in February, sliding from 50.4 in the preceding month (a reading below 50.0 indicates contraction, while a reading above 50.0 points at expansion of the manufacturing sector). Meanwhile, buying levels remained unchanged.

In January 2017 Indonesia's manufacturing PMI showed contraction for the first time in four months. However, despite this positive rebound, there were already concerns that this rebound would not be sustainable as new export orders continued to contract, while strong cost increases restricted companies' purchasing activity.

Meanwhile, input costs continued to rise in February 2017 amid rising commodity prices and the stronger US dollar. Overall, the rate of cost inflation was robust and the second-fastest in 15 months. Therefore, factory gate charges were raised for the sixth successive survey.

Pollyana De Lima, economist at IHS Markit, said: "Following the economic rebound seen at the start of 2017, the Indonesian manufacturing industry is back in the red as output and new orders fell during the month of February 2017. A lack of domestic demand couple with weakness in global markets meant that opportunities to capture new work were scarce. Meanwhile, there was further despair on the employment front as staffing levels declined for the fifth straight month."

Still Markit remains optimistic as it expects the Indonesian economy to grow 5.1 percent (y/y) in 2017. Both monetary policy stimulus (implemented in 2016) and government reforms should boost foreign investment and domestic demand. 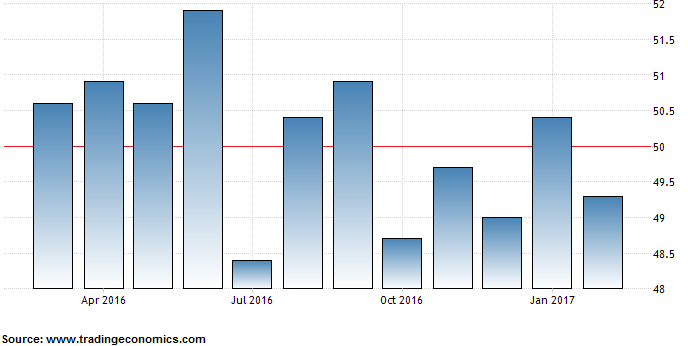