In 2013 Indonesia managed to attract a record number of foreign tourists. Around 8.8 million foreigners entered Indonesia - mostly in Bali - last year, a 9.42 percent increase from 2012, and earning up to USD $10.05 billion in foreign exchange (up 10.23 percent from 2012). Indonesia's tourism sector thus grew at a faster pace in 2013 than the general economy (5.78 percent) and now accounts for 3.8 percent (IDR 347.35 trillion) of the country's gross domestic product (GDP). However, this is still a low figure compared to its regional peers.

Continuously growing numbers of foreign (and domestic) tourists in Indonesia imply that demand is strong. This year, the Indonesian government - through its Ministry of Tourism and Creative Economy - targets to welcome 10 million foreign visitors. If this target is met, it means that foreign tourist arrivals will have doubled since 2005 when Indonesia was visited by 5 million foreign tourists.

This significant growth is achieved despite the more-or-less 'unconducive climate' in the country's tourism sector. When we take a look at the World Economic Forum's Travel & Tourism Competitiveness Report 2013, Indonesia is ranked 70th (up four places since the last edition). Various regional peers are in fact ranked higher: Singapore (10th), Malaysia (34th) and Thailand (43rd). According to the report, Indonesia's strengths are its excellent natural resources, with several World Heritage natural sites and the richness of its fauna as measured by the known species in the country. The country also has rich cultural resources, with ten World Heritage cultural sites, a number of international fairs and exhibitions, and strong creative industries. Further, the country performed well on price competitiveness in the T&T industry because of competitive hotel prices, low ticket taxes and airport charges, and favorable fuel prices. In addition, the country was praised for its national prioritization of travel & tourism.

Other concerns are related to safety & security (business costs of crime and potential terrorism). In addition, Indonesia is not ensuring the environmentally sustainable development of the tourism sector, an area of particular concern given the sector’s dependence on the quality of the natural environment. 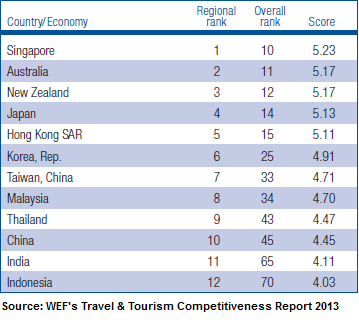 Further growth of Indonesia's tourism sector is important, particularly in the context of labor absorption. In 2013, 10.2 million Indonesians, or 8.89 percent of the total national workforce, were employed in the tourism sector. By increasing tourism's contribution share toward the national economy, the country's unemployment rate can be reduced further.