In line with our forecast, Indonesian exports to overseas markets declined mildly in July 2022 (compared to the previous month). However, unlike last month’s forecast, imports into Indonesia expanded mildly over the same period.

Surprisingly, imports of oil and gas rose significantly on a month-on-month (m/m) basis. The increase was in fact so significant that it more than compensated for the mild drop in non-oil and gas imports into Indonesia. But first we take a closer look at the global environment.

As mentioned last month, the latest data released by the United Nations Conference on Trade and Development (or UNCTAD) show that the value of global trade (goods and services) grew to a record USD $7.7 trillion in Q1-2022, which is an increase of about USD $1.0 trillion relative to Q1-2021, and of about USD $250 million relative to Q4-2021. However, despite still increasing, the value of global trade continued to decelerate.

So, while the growth rates are impressive (with the value of global trade being about 30 percent higher in Q1-2022 than pre-COVID-19-crisis levels), the contrast is that trade volumes increased to a much lower extent over the same period (by about six percent). This discrepancy between value and volume is caused by the significant increase in commodity prices, particularly of energy and food products, and general inflation. It is a situation that is quite comfortable for commodity-rich countries such as Indonesia. However, one can argue that – in terms of trade – the global economic situation at the moment looks better on paper than it actually is in reality.

Moreover, there is a list of factors that causes further doubts over the health of the global economy (and therefore also casts doubts on demand for international trade in the period ahead) in the second half of 2022:

Take a glance inside the report here! (28 pages) 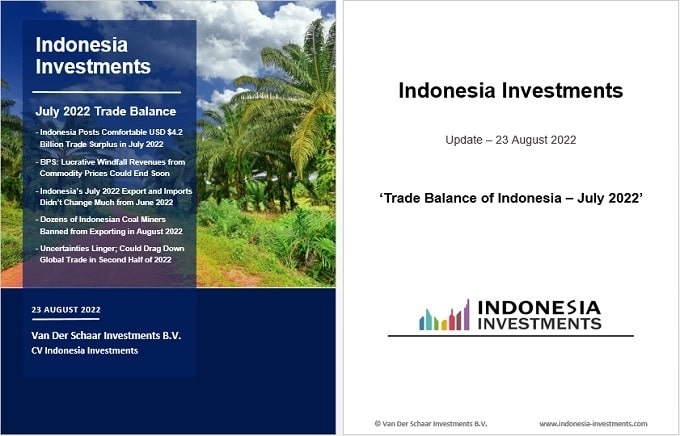