Indonesia’s export performance was impressive in August 2022, touching a new all-time record level of USD $27.91 billion. It was particularly the strong rebound in the value of refined palm oil shipments that pushed Indonesian exports higher. Imports into Indonesia also increased, albeit at a much slower pace, which especially came on the back of sharp growth in imports of capital goods.

Meanwhile, as a direct consequence, Indonesia enjoyed another comfortable (USD $5.76 billion) trade surplus in August 2022. This pushed the country’s year-to-date trade surplus to a whopping USD $34.92 billion (January-August 2022), which is a very positive matter for the current account balance, foreign exchange reserves, and the rupiah rate (despite the fact that the rupiah remains under pressure amid global monetary tightening, while Indonesia’s foreign exchange reserves have fallen over the past year as the central bank ‘burns’ foreign exchange to support the rupiah).

China, which is the biggest trading partner of Indonesia, did not experience a great trade performance in August 2022 as exports only grew by 7.0 percent year-on-year (y/y) to USD $314.9 billion (implying a deceleration from the preceding month’s 18 percent growth pace). Meanwhile, China’s imports contracted by 0.2 percent (y/y) to USD $235.5 billion compared with the previous month’s already weak 2.3 percent (y/y) rise. China’s trade reportedly weakened in August 2022 due to the high energy prices, increases in global interest rates (that aim to combat surging inflation), and COVID-19 restrictions that drag down global and Chinese consumer demand.

This subsequently adds to concerns over the health of the Chinese economy. In the first half of 2022 the economy of China grew by 2.5 percent (y/y), which is much less than Beijing’s 5.5 percent (y/y) target for full-year 2022.Surprisingly, imports of oil and gas rose significantly on a month-on-month (m/m) basis. The increase was in fact so significant that it more than compensated for the mild drop in non-oil and gas imports into Indonesia. But first we take a closer look at the global environment.

Take a glance inside the report here! (24 pages) 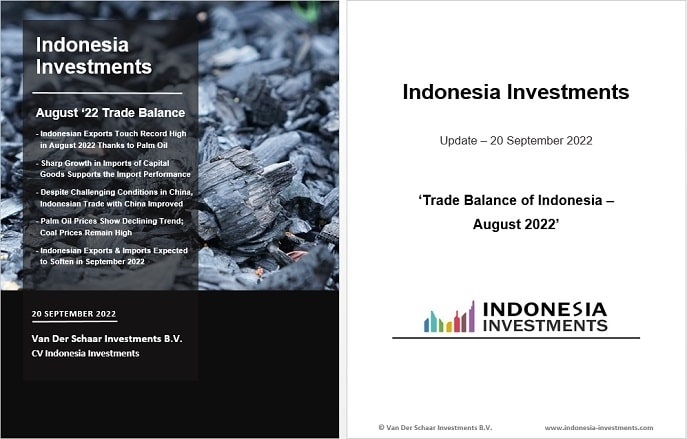