The central bank of Indonesia (Bank Indonesia) announced two important matters on Thursday (14/08). Firstly, the institution decided to maintain the benchmark interest rate (BI rate) at 7.50 percent, the overnight deposit facility rate (Fasbi) at 5.75 percent, and the lending facility rate at 7.50 percent. Secondly, it announced that Indonesia’s current account deficit widened to USD $9.1 billion, or, 4.27 percent of the country's gross domestic product (GDP) in the second quarter of 2014, a widening that is larger than initially forecast.

Despite the widening current account deficit in Q2-2014, Indonesia's central bank left its interest rate policy unchanged as it is still convinced that the current BI rate is capable of lowering the deficit in the remainder of the year. Moreover, inflation has continued its easing trend in 2014. In July 2014, inflation was 4.53 percent (year-on-year), down from 6.70 percent (yoy) recorded in the previous month as food prices were stable during the Ramadan and Idul Fitri period while the impact of higher subsidized fuel prices, introduced in June 2013, vanished from the annual figure. Bank Indonesia expects that inflation will be held within its target range of 3.5 to 5.5 percent at the year-end.

The current account deficit is a major fiscal burden for Indonesia as it widened from (a revised) 2.05 percent of GDP in the first quarter of 2014 to 4.27 percent of GDP in the second quarter. Generally, a deficit below the 3 percent of GDP mark is considered sustainable. A current account deficit basically indicates that the country consumes more than it can produce and requires capital inflows to finance the deficit. On a positive note, Indonesia’s current account deficit in Q2-2014 was slightly lower than the record high result in the second quarter of 2013 when it was recorded at USD $10.1 billion (or 4.47 percent of GDP). The Governor of Bank Indonesia, Agus Martowardojo, also stated that he expects the deficit to decline in the next two quarters as several large mining companies will resume exports of mineral-ore after reaching an agreement with the government. Freeport Indonesia, which operates the world's largest gold and third-largest copper mine in Papua (Grasberg mine), is one of these mining companies. Martowardojo estimates that this year’s current account deficit will be about USD $27 billion (around 3 percent of GDP), slightly lower than the USD $29 billion deficit (3.3 percent of GDP) in 2013. The foremost reason why Indonesia has a wide current account deficit is because of expensive oil imports and generous government fuel subsidies. Newly elected President Joko Widodo, who will take office in October 2014, previously said that he would gradually wind down the fuel subsidies but it remains unclear when and how this will happen. 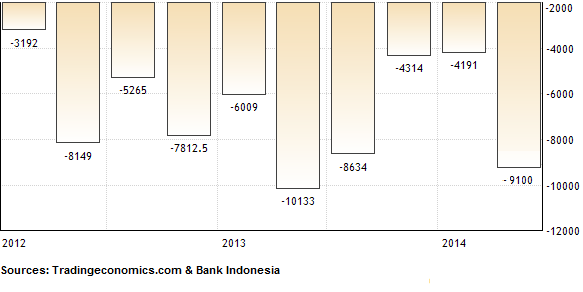 Bank Indonesia is also expected to keep the BI rate relatively high to avert the impact of looming interest rate hikes in the United States in 2015. As the US quantitative easing program has been scaled back since the start of 2014 it won’t take long before US interest rates rise. Higher US interest rates can lead to capital outflows from emerging economies, including Indonesia. US rate hikes can be followed by higher interest rates in Great Britain and Europe in the next two years.

Indonesia’s central bank had raised the BI rate gradually between June and November 2013 from 5.75 percent to 7.50 percent in order to combat high inflation, limit the current account deficit, and support the rupiah exchange rate. In that period Indonesia was severely hit by capital outflows amid the looming end of the US quantitative easing program which meant an end to the flow of cheap US dollars to emerging market in search for lucrative yet riskier assets. The relatively high BI rate is also partly to blame for slowing economic growth in Southeast Asia’s largest economy. Earlier this month, Statistics Indonesia announced that GDP growth in the second quarter slowed to 5.12 percent (year-on-year), the slowest quarterly growth pace since the fourth quarter of 2009. This monetary tightening is a sign that the central bank prefers financial stability over higher economic expansion. This year, Indonesia’s economy is expected to grow about 5.2 percent (yoy).

After Bank Indonesia had announced that the current account deficit widened more than expected in the second quarter of 2014, the Indonesian rupiah exchange rate conceded earlier gains it had made on today’s trading day. However, at the end of the day, Indonesia’s currency still managed to appreciate 0.12 percent to IDR 11,679 per US dollar based on the Bloomberg Dollar Index. Meanwhile, Bank Indonesia's benchmark rupiah rate (Jakarta Interbank Spot Dollar Rate, abbreviated JISDOR), which was set before the central bank announced August interest rates and the Q2-2014 current account balance, appreciated 0.05 percent to IDR 11,667 per US dollar.