Meanwhile, Indonesia’s oil & gas balance in December 2014 also improved. Oil & gas exports grew 11.7 percent (m/m) to USD $2.35 billion, mainly supported by an increase in crude oil, oil products, and gas exports. On the other hand, oil & gas imports declined by 2.4 percent (m/m) or be of 3.39 billion US dollars, which is caused by a drop in imports of gas and oil products.

Indonesia’s central bank (Bank Indonesia) said in a statement that it believes that the improved trade performance of Indonesia will have a positive impact on the country’s current account balance in 2014. Bank Indonesia predicts that the overall performance of the trade balance will continue to improve in the foreseeable future supported by an increase in export activity in line with the global economic recovery and the downward trend in global oil prices. 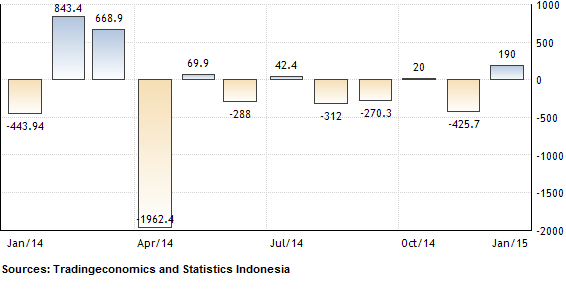