According to the latest survey of Bank Indonesia (the central bank of Indonesia), the country’s January retail sales accelerated 10.4 percent year-on-year (y/y), up from the 3.3 percentage point growth pace (y/y) in the preceding month. Retail sales in the first month of the year in Southeast Asia’s largest economy accelerated because of higher sales of information & communication equipment (+29.9 percent y/y) as well as food, beverages & tobacco products (+15.1 percent y/y).

With inflation easing sharply in combination with a lower interest rate environment, Indonesians’ purchasing power has improved. Hence, the survey also signaled that retail sales are expected to continue to accelerate in February 2015. Last month Indonesian inflation eased to 6.29 percent (y/y) from 6.96 percent (y/y) in January. In mid-February Bank Indonesia lowered its benchmark interest rate (BI rate) by 25 basis points to 7.50 percent. Indonesian retailers believe that inflation will moderate in March and April as the ending of the rainy season will smoothen the country’s distribution channels while a peak in the harvest season is to relieve price pressures on rice. 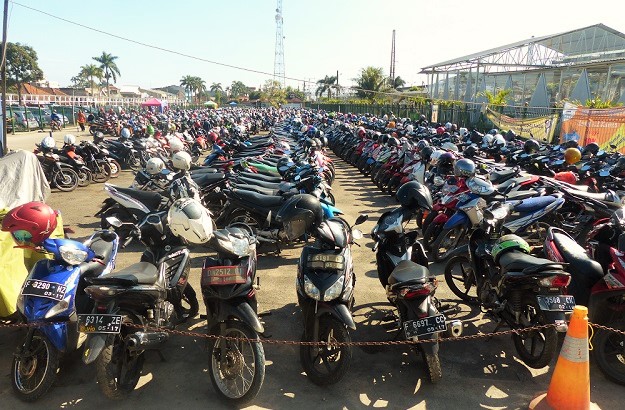 Bank Indonesia’s survey uses the input of more than 650 retailers based in ten major Indonesian cities.

However, despite an expected acceleration of retail sales in February, cement sales in Indonesia fell 8.2 percent (y/y) to 4.13 million tons in February due to rainy weather hampering construction of property and infrastructure projects and on low commodity prices which weaken people’s purchasing power. Moreover, many of the much-anticipated government infrastructure projects are still to see groundbreaking. However, Chairman of the Indonesian Cement Association (ASI) Widodo Santoso expects higher cement sales in April 2015 as several of the public infrastructure projects will commence. Moreover, the construction of several power plants in Sumatra, Kalimantan and Sulawesi will also boost the country’s cement demand.

Meanwhile, sales of motorcycles in Indonesia fell 16 percent (y/y) to 570,524 units in February 2015. However, compared to January 2015, motorcycle sales accelerated 11 percent (m/m) to 513,816 units. Chairman of the Indonesian Motorcycle Association (AISI) Gunadi Sinduwinata said that Indonesia’s motorcycle sales historically tend to be weak in the first quarter of the year. He added that motorcycle sales in Jakarta, Indonesia’s capital city, have become saturated and therefore motorcycle sales now need to be supported by new growth centers in the regions of Indonesia. For example, the province of East Java now contributes most to the country’s total motorcycle sales.

In the past couple of months, sales of motorcycles have declined due to weaker purchasing power amid high inflation, and higher subsidized fuel prices at the end of 2014 (at the start of 2015 these prices were lowered amid global low oil prices). If Indonesia’s motorcycle sales will be back on track before mid-2015 then Sinduwinata expects to see 7.9 million motorcycle sales in full-year 2015, basically the same result as last year.