As expected, Indonesia’s export performance was heavily disrupted by the palm oil export ban (that was imposed by the Indonesian government between 28 April and 23 May 2022 to stabilize the domestic cooking oil prices). Compared to the previous month, exports of animal/vegetable fats and oils (which include palm oil products) tumbled by a whopping USD $2.1 billion in May 2022.

However, besides palm oil, we detected a more general decline in Indonesia’s export performance, hence – in total – the country’s exports tumbled nearly USD $6.0 billion in May 2022. And, considering imports experienced a much milder decline, the trade balance narrowed rather significantly (although remaining in surplus at USD $2.89 billion), down from the all-time high it recorded in April 2022 (USD $7.56 billion).

It means that Indonesia somewhat missed out on the improving global conditions in May 2022. For example, China showed its first signs of reopening with restrictions in Shanghai being eased, thereby allowing an improvement in economic activity. As a result, imports into China rose 4.1 percent year-on-year (y/y), which is modest but (at least) the first expansion in three months, while exports from China rebounded by a much stronger 16.9 percent (y/y) in May 2022.

Meanwhile, imports into Japan increased by 48.9 percent (y/y) in May 2022 to touch a fresh record peak, which was well above market estimates, and also much faster than the 28.3 percent (y/y) gain seen in the preceding month. For Japan it was the 14th straight month of double-digit growth in imports (and the fastest growth since May 1980) amid strong domestic demand, soaring commodity prices, and as a weak yen has been pushing costs higher for consumers and businesses.

Exports from Japan increased by a decent 15.8 percent (y/y) in May 2022, improving from a 12.5 percent (y/y) increase in April 2022. It was the 15th consecutive month of growth in shipments from Japan (Indonesia’s third-biggest trading partner), and the steepest pace in three months, amid easing supply chain disruptions. However, disruptions persist. For example, those in Indonesia who want to buy a motorcycle (a Japanese branded one like Honda or Yamaha) still need to wait longer than usual as the distribution of certain components from Japan continues to be disrupted.

But despite these generally improving trade conditions, Indonesia’s exports to China and Japan fell strongly in May 2022, thereby failing to take advantage of improving conditions. The value of Indonesian exports to China declined by USD $899 million, and to Japan by USD $614 million in May 2022 (compared to preceding month). We assume that the palm oil and cooking oil export ban of Indonesia is a major factor behind these declines. Meanwhile, the United States (US) is yet to release its latest trade data, but based on the data released by Indonesia’s Statistical Agency (Badan Pusat Statistik, BPS) we also see a deterioration in Indonesian shipments to the US (falling by USD $404 million in May 2022 compared to April 2022).

When we take a look at global commodity price movements in May 2022 (see table 1 below), then we see that the palm oil price edged up (thanks to Indonesia’s export ban as Indonesia is the world’s biggest grower and exporter of palm oil). However, Indonesia obviously failed to capitalize on this price increase due to the ban.

Furthermore, on a month-on-month (m/m) basis, the coal price declined as surging inventories and weaker demand put pressure on the market. Considering Indonesia is a force in terms of coal exports, sliding coal prices are certainly not a good omen for the country’s export performance.

If we take a look at the import-side, then rising prices of crude oil put some pressure on Indonesia’s trade balance (as Indonesia remains a net oil importer), while rising prices of wheat and soy may cause some inflationary pressures. Beef prices can also become interesting in the weeks ahead as Indonesia may need to import more beef from abroad (ahead of the Idul Adha celebrations –Day of Sacrifice– on 9 and 10 July 2022 when demand for beef peaks) after a foot-and-mouth disease in cattle broke out last month. Indonesia launched a nationwide livestock vaccination program in mid-June 2022 (but to what extent that will be a success remains unknown).

This is only the introduction of the article. In case you want to buy the full article (an electronic report) you can contact us by sending an email to info@indonesia-investments.com or a message to +62.882.9875.1125 (including WhatsApp). 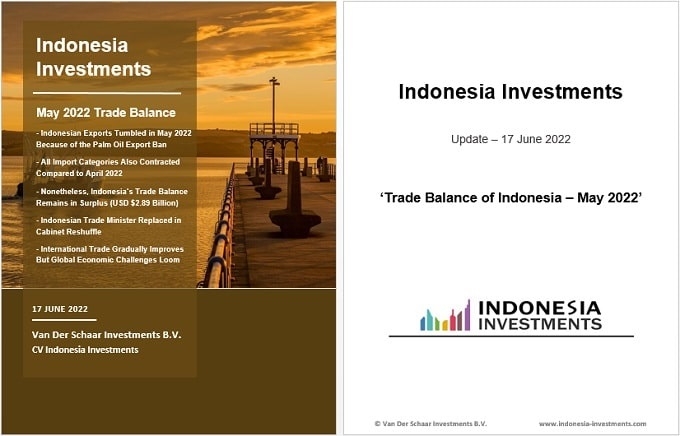