In its March 2016 Indonesia Economic Quarterly, titled "Private Investment is Essential", the World Bank cut its forecast for Indonesia's economic growth in 2016 to 5.1 percent year-on-year (y/y) from an earlier estimate of 5.3 percent (y/y). This downward revision was made due to weaker-than-expected global economic conditions, further weakening commodity prices, and limitations to Indonesian government spending brought about by a looming shortfall in tax revenue.

The 'good' news is that the 5.1 percent (y/y) GDP growth in 2016 would mean that Indonesia's period of economic slowdown has ended. Since 2011 Southeast Asia's largest economy has been experiencing a period of economic slowdown due to falling commodity prices, the sluggish global economy, and tight monetary policy (high benchmark interest rate). Last year, Indonesia's economy expanded by 4.8 percent (y/y), a six-year low. However, the World Bank expects growth to pick up this year primarily on improved government spending on infrastructure. Last year, a major improvement in public spending had already been detected. The World Bank stated that central government spending rose 42 percent (y/y) in 2015 on the back of the reduction of fuel subsidies in the preceding year. However, private investment in Indonesia remained subdued.

Although Indonesia's GDP growth is higher than that of most other economies that rely heavily on commodity exports, World Bank Country Director for Indonesia Rodrigo Chaves says the 5.1 percent (y/y) GDP growth would be insufficient to create enough jobs for the three million Indonesians who enter the nation's work force each year. As public spending is limited, the Indonesian government needs to rely heavily on private investment to boost the nation's economic growth. However, in order to attract more private investment, the government needs to commit to sustained and comprehensive regulatory reforms in order to enhance Indonesia's investment and business climate (including reducing the costs of doing business). The World Bank further advises Indonesia to lower capital requirements for logistics companies, implement a centralized review system of trade regulations, and improve institutional coordination and public education to increase access to finance.

The Indonesian government is expected to fail to achieve its tax revenue target in 2016, particularly now there has been a delay in deliberation about the tax amnesty bill. This bill, which would make it attractive for tax evaders to report and transfer their wealth into the country, was estimated to add IDR 100 trillion (approx. USD $7.6 billion) to Indonesia's tax revenue. 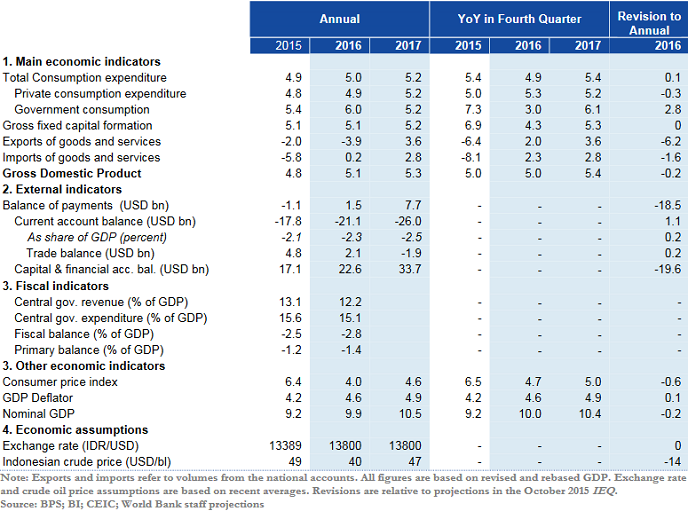 As there a no signs that commodity prices will rebound sharply in the foreseeable future, the World Bank advises Indonesia to remain committed to the government's plan to develop the manufacturing and services sectors (especially tourism). The Washington-based institution adds, however, that Indonesia's manufacturing sector has been plagued by a 13.4 percent (y/y) fall in manufacturing exports, while it remains tough to develop Indonesia's tourism industry due to the lack of sufficient infrastructure development. However, by keeping eyes focused on the long-term fruits of having a well-developed manufacturing sector and being a major tourist destination, the government should remain committed to develop these industries.

• Visit the Indonesia section on the website of the World Bank