Since late 2011 Indonesia has been plagued by a structural current account deficit (CAD) that has worried both policymakers and (foreign) investors. Despite Indonesian authorities having implemented policy reforms and economic adjustments in recent years, the country’s CAD remains little-changed in 2015. The World Bank and Bank Indonesia both expect the CAD to persist at slightly below 3 percent of the nation’s gross domestic product (GDP) in 2015, alarmingly close to the boundary that separates a sustainable from an unsustainable deficit.

The current account of the balance of payments is the broadest measure of a country’s international trade. This covers transactions in goods, services, factor income (from assets and labour), as well as transfers. As such, when a country posts a CAD it actually means that the country is a net borrower from the rest of the world and thus needs capital or financial flows to finance this deficit.

It is important to point out that a CAD is not per se bad. Similar to a company’s negative cash flow, the deficit can be a positive matter provided that the funds are used for productive investment purposes (which result in future revenue streams) such as industrial or infrastructure development. However, when the deficit is merely used for consumption it causes a structural imbalance as it generates no future revenue streams. The International Monetary Fund (IMF) recently said that a CAD of 1.5 percent of GDP is normal for Indonesia. However, although it can be normal it still implies that the country is accumulating net foreign liabilities and this may pose risks over time. 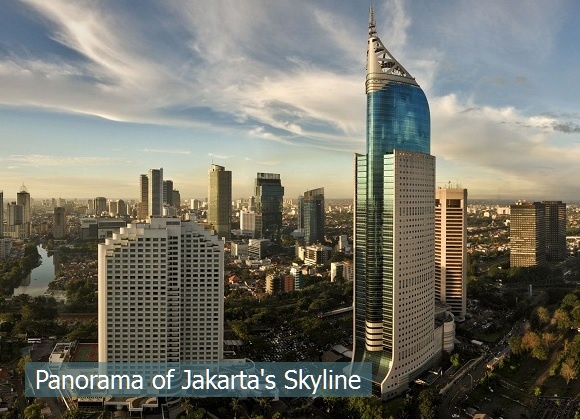 Being an important statistic, investors (in financial and stock markets) are advised to take some time to learn about a country’s current account balance before investing in any assets. It is a well-known fact that countries that are plagued by a CAD are highly vulnerable to capital outflows in times of economic turmoil. For example, when former Federal Reserve Chairman Ben Bernanke announced in May 2013 that the US central bank was thinking about winding down the generous quantitative easing program (hence triggering severe global uncertainty and volatility), Indonesia was one of the emerging markets that was hit most severely. The two charts below show that Indonesia’s benchmark stock index (Jakarta Composite Index) and the rupiah rate started to weaken heavily in late-May 2013 after Bernanke’s statement as foreigners pulled funds out of the country’s markets. While both stocks and the rupiah did feel the positive impact of the “Jokowi-effect” (referring to the announcement of Joko Widodo’s candidacy for presidency in early 2014 and which was partly the reason for record portfolio inflows that year), the rupiah soon continued to depreciate again (ahead of further US monetary tightening i.e. higher US interest rates) whereas stocks (despite high volatility) were still able to show an upward trend (until the second quarter of 2015).

Why has Indonesia been Plagued by a CAD since Late 2011?

Due to sluggish global economic growth, particularly moderating growth in China (a key trading partner of Indonesia), Indonesian exports have dropped dramatically since 2011. The country started to post a CAD in the fourth quarter of 2011, and it has stayed negative ever since. The decline in global commodity demand and prices caused a major trade shock. Indonesia, a key commodity exporting country, saw its commodities export revenues decline by about one-sixth over 2011-2014. Moreover, regarding trade of its major commodities (such as coal and crude palm oil), revenues in fact halved.

As such, Indonesia’s export performance declined severely from 2011. Imports, on the other hand, were growing as the government upheld its decades-old fuel subsidy program. This program, which aimed to protect the country’s poorer segments of the population, made some sense in the 1980s and 1990s when Indonesia was a net oil exporter (although such subsidies when applied long term always distort the economy as it keeps transportation costs artificially low and it is impossible to continue this situation as oil is an exhaustive resource). However, when Indonesia became a net oil importer in the mid-2000s (due to sharply falling oil output in combination with rapidly increasing domestic fuel demand) the oil & gas trade deficit grew.

In its latest Indonesia Economic Quarterly (July 2015), the World Bank states that “[Indonesia’s] narrower non-oil & gas goods trade surplus accounts for about half (49 percent) of the USD $30.5 billion deterioration in the current account balance from 2010 to 2014, oil & gas trade somewhat under a third (29 percent), and higher income outflows about a quarter (23 percent, most of which occurred in 2010).”

In the second quarter of 2013 Indonesia had posted a record high current account deficit (in recent history) at USD $10.1 billion, or 4.4 percent of GDP. Although due to seasonal reasons the country’s CAD tends to rise in the second quarter, it was an alarmingly high level. Generally, a CAD at a maximum of 3 percent of GDP is considered sustainable. Again, a CAD is not necessarily bad. However, as mentioned above, a major reason for Indonesia’s CAD was the country’s ballooning oil import bill. Therefore, the deficit was not used for productive investment purposes (resulting in future revenue streams) but for people’s ever-increasing fuel consumption.

As ballooning oil imports were a key problem, the government (then still under the leadership of Susilo Bambang Yudhoyono) decided to cut fuel subsidies (for the first time since 2008) in late June 2013, effectively raising gasoline prices 44 percent and diesel prices 22 percent, as these subsidies threatened to swell to USD $30 billion in 2013, pushing the country’s budget deficit well beyond the legal limit of 3 percent of GDP. More recent reforms, under the leadership of current President Joko Widodo, have cut budgeted fuel subsidies to 0.6 percent of GDP in 2015, reducing budgeted energy subsidies (for both fuels and electricity) to 1.2 percent of GDP in 2015, down from an average of 3.3 percent in 2011-2014. Such reforms should contribute to the future sustainability of Indonesia’s external position and reduce fiscal risks from, and increase the expenditure-switching power of, any further rupiah depreciation.

After external financing conditions deteriorated markedly from mid-2013, Bank Indonesia decided to tighten its monetary stance through interest rate hikes and macro-prudential measures aimed at reducing domestic demand (hence curbing imports). The country’s key interest rate (BI rate), which had been at a historically low of 5.75 percent from February 2012, was raised gradually, yet aggressively, between June 2013 and November 2013 from 5.75 to 7.50 percent. Although this was primarily done to combat accelerated inflation after the June 2013 subsidized fuel price hike, a higher interest rate also supports the moderation of domestic demand for imports.

Bank Indonesia’s flexible exchange rate management (since mid-2013) also contributed to macroeconomic stability. The Indonesian rupiah has depreciated approximately 33 percent against the US dollar over the past two years as the central bank adopted a more hands-off approach to its currency. The World Bank notes that “depreciation in real effective (i.e. trade-weighted) terms has been a more moderate 10 percent, and an initially sharp adjustment in the second half of 2013 has been followed by a generally orderly depreciation trend.” This approach of the central bank helped to cushion the trade shock by reducing export price falls in rupiah terms. It also improved currency market liquidity and supported a recovery in the country’s gross foreign reserves.

However, despite largely scrapping fuel subsidies in early 2015, low global petroleum prices and curbed domestic demand growth, Indonesia’s CAD remained at about 2.9 percent of GDP in 2014 and is forecast to stay around that level in 2015. The primary reason behind this is that, amid the sluggish global economy (and rapid slowing economic growth of China), Indonesia’s export performance continued to deteriorate. While Indonesia’s imports declined significantly (by 4.5 percent y/y in 2014), the country’s export revenues continued to drop (by 3.7 percent y/y in 2014) as well. Broadly, Indonesia’s net commodity exports remained a drag on the country’s current account balance, while the manufactures trade deficit improved gradually (mainly due to import compression since 2013), while the more recent decline in global oil and prices has helped to lift the country’s goods trade balance back into surplus.

It is true that in the first quarter of 2015 Indonesia’s CAD stood at 1.8 percent of GDP. However, this is caused by favourable seasonal factors. Compared to the same quarter one year earlier, the CAD had only improved 0.1 percent.

The CAD of Indonesia is caused by a complex mixture of factors, many of which are structural and long-term in nature. As the country is still in the relatively early stages of economic convergence to higher-income trading partners it implies a faster growth rate, a higher domestic return on capital, and an excess of investment spending over domestic saving, tending to push the current account towards deficits. Policy measures to force the country’s current account back into surplus, for example by curbing imports directly through regulatory measures or through fiscal contraction, would push the economy off its trend path, at a cost to economic growth. However, fortunately, Indonesia does not have to pay this price. Assuming no short-term financing difficulties, moderately-sized CADs can be run indefinitely (and sustainably), provided that these deficits contribute to a rapid enough pace of structural economic expansion.

The Indonesian government should focus on policies that enhance the country’s integration into global markets and invest in infrastructure development as well as human resources to overcome the skills gap. These measures would boost the country’s international competitiveness and generate growth, jobs and incomes. Increased foreign direct investment, required to gain technology and knowledge as well as to become a regional production and export hub, can be attracted by addressing the country’s regulatory uncertainties and high costs. Foreign direct investment is a large and relatively stable source of external financing.