In the second half of September 2022 the Indonesian rupiah experienced some steep depreciating pressures, nearly touching IDR 15,300 per US dollar. It prompted Bank Indonesia to step and intervene in markets to limit the currency’s decline; a step that typically leads to a drop in the country’s foreign exchange reserves.

Obviously, it is not only the rupiah – or Indonesian stocks and bonds – that are under heavy pressure. They are part of a wider trend that is visible across Asian emerging economies. In fact, other emerging Asian currencies seem to perform worse than the rupiah (so far this year) as investors are attracted by rising US yields. Not even gold – amid the uncertain global environment – can shake off aggressive Federal Reserve tightening (with gold prices being around two-year lows at the time of writing).

On the one hand, it is the ever more hawkish US Federal Reserve (Fed) that weighs on all emerging Asian assets as the Fed is far from finished tightening its monetary policy to combat high US inflation. However, there may be more to come than higher interest rates alone. Based on statements from Fed officials, the Fed seems willing to ignite a full-blown US recession in order to push US inflation down.

Meanwhile, in the European Union (EU) we more-or-less see the same situation as European Central Bank (ECB) officials stated that aggressive monetary tightening is to continue to combat record inflation around the bloc, even if it triggers a recession in the EU. So, it seems like the Fed and ECB see an economic recession as the solution to the inflation problem, or, – at least – are more than willing to risk an economic recession through aggressive monetary tightening.

A looming global recession and a strong US dollar are bound to impact on Indonesia. The strong US dollar causes imported inflation into Indonesia (while Indonesia is already struggling to keep inflation in check after the central government decided to raise prices of subsidized fuels at the beginning of September 2022). Accelerating Indonesian inflation limits Indonesian consumers’ purchasing power, and therefore consumption should weaken as a consequence, thereby dragging down the pace of national economic growth (domestic consumption accounts for about 53-55 percent of the country’s total economic growth). Moreover, a strong US dollar is also bad for those who hold (unhedged) US dollar-denominated debt.

And at a certain point we can also expect Indonesia’s trade balance to weaken amid global economic turmoil as the looming global recession would undermine demand for commodities. China’s yuan, for example, is currently hovering near a record low against the US dollar, a situation that could depress demand from Chinese importers (if yuan weakness persists), hence adding to the bearish sentiment for commodities. Since the recovery from the COVID-19 crisis Indonesia has been collecting windfall revenues through commodities (particularly stemming from coal and refined palm oil exports). In fact, the Indonesian government even recorded a (very rare) budget surplus so far in 2022. On the other hand, a decline in exports would be a reminder that Indonesia needs to reduce its dependence on (barely processed) commodities. 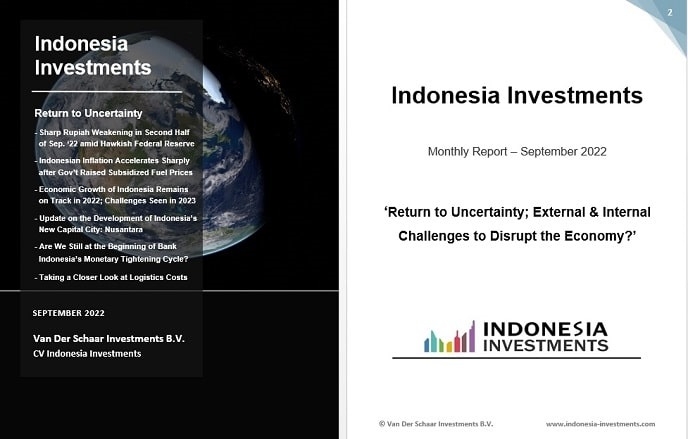