The completion of the high-speed Jakarta-Bandung railway in West Java is expected to see a delay due to land acquisition and licensing troubles. The USD $5.9 billion project is now expected to be completed in 2020, one year later than originally planned.

These troubles show that the project's groundbreaking ceremony - conducted on 21 January 2016 in the presence of Indonesian President Joko Widodo - actually came way too soon for the Jakarta-Bandung railway. In its quest for infrastructure development, the Indonesian government sometimes seems to push too hard, hence resulting in a poorly prepared (legal) framework for big infrastructure projects that cover land in multiple provinces and districts.

Recently, we have also read in local media that several Indonesian construction workers died in big projects around Jakarta. These casualties could very well be caused by too much focus on the progress of the project, while safety measures and precautions take a back seat.

Another interesting indication that actions are being taken too fast is the inscription on the memorial stone that was laid for the groundbreaking ceremony of the Jakarta-Bandung railway. There is a spelling mistake in one of the words in this inscription (pembagunan instead of pembangunan, meaning development or construction). This could very well be a sign that the launch of the project was being pushed too hard and therefore resulted in inaccuracies. 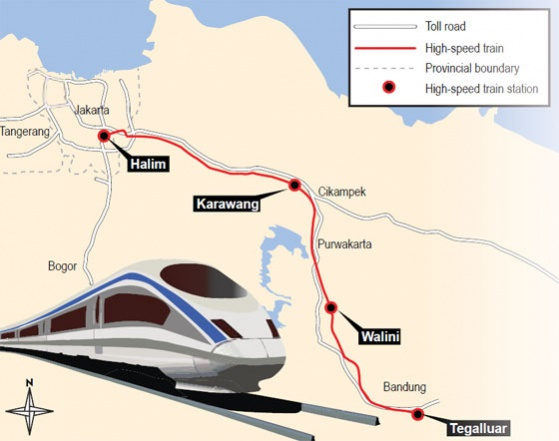 The Jakarta-Bandung railway project has been controversial since the start (and was even off the table completely for a while). First it seemed Japan would be offered the contract to build the railway after the country had spent several millions to conduct preparational studies. However, in 2015 China started to show interest in the project and send several construction proposals to the Indonesian government. More importantly, China did not request any financial assistance nor guarantees from the Indonesian government, while it also said it could complete the project at lower costs and at an earlier date.

Possibly the biggest obstacle in the project (and any other big infrastructure project) is land acquisition. Although groundbreaking was conducted two years ago, currently only 54 percent of all required land for the Jakarta-Bandung railway project has been acquired. Meanwhile, progress with construction is only estimated at ten percent. Problematically, the China Development Bank, the key source for funds in this project, is hesitant to disburse money when land acquisition has not reached 100 percent.

The Jakarta-Bandung railway project, a 142.3 kilometers-long railway, is developed by Chinese-Indonesian consortium Kereta Cepat Indonesia China (KCIC). About 75 percent of the costs are financed by the China Development Bank. The remaining 25 percent is funded by the consortium. The consortium consists of China Railways and Pilar Sinergi BUMN Indonesia. The latter consists of state-owned companies Wijaya Karya, Jasa Marga, Perkebunan Nusantara VIII, and Kereta Api Indonesia.