Indonesia’s inflation reached 2.46 percent month-to-month (m/m) in December 2014 due to the impact of higher subsidized fuel prices implemented on 18 November 2014. On a year-on-year (y/y) basis, Indonesia’s inflation was recorded at 8.36 percent, slightly lower than the result in 2013 (8.38 percent). Inflation has been high in 2013 and 2014 as the Indonesian government raised prices of subsidized fuels in both years in an attempt to relieve fiscal pressures brought about by costly oil imports.

Although at the year-end inflation accelerated more than initially estimated, inflation should ease in the months ahead as the impact of higher subsidized fuel prices moderates (On 18 November 2014 subsidized fuel prices were raised by more than 30 percent). However, inflationary pressures will be triggered by higher LPG prices (for 12-kilogram canisters). Moreover, the government plans to raise electricity tariffs again. The dismantling of fuel subsidies (scrapping low-octane gasoline subsidy and using a fixed IDR 1,000 per liter diesel subsidy) per 1 January 2015, which implies that retail prices for gasoline and diesel have become cheaper (than prices under the subsidy mechanism) due to sharply falling global oil prices, is not expected to result in significant deflationary pressures in the months ahead. 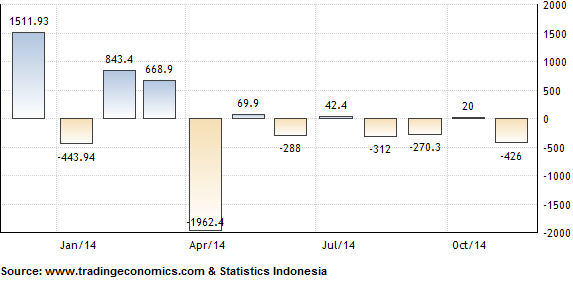 Cumulatively, Indonesia now has a trade deficit of USD $2.07 billion in the January-November 2014 period mainly caused by a wide trade deficit in the country’s oil & gas sector. This deficit is expected to decline after the government reformed its subsidized fuel price policy. This will then have a positive affect on the country's current account balance. In the third quarter of 2014, Indonesia's current account deficit was USD $6.84 billion, or 3.07 percent of the country’s gross domestic product (GDP).

Indonesia’s HSBC manufacturing purchasing managers' index (PMI) fell to 47.6 in December 2014 from 48.0 in the previous month (a reading below 50 signals contraction in the manufacturing sector). This score constitutes a record-low for Southeast Asia’s largest economy. HSBC economist Su Sian Lim said that “the decline came as weak external demand placed a particularly large drag on manufacturing-sector conditions. However, while manufacturing-sector conditions were likely to remain soft in coming months, there were some signs that the PMI might be reaching a nadir. For instance, work backlogs fell at a slower pace than in the previous month.”