In terms of market capitalization, the largest listed company on the Indonesia Stock Exchange (IDX) is now Bank Central Asia (BCA). BCA, Indonesia’s second largest bank by assets, managed to surpass HM Sampoerna and Astra International at the end of 2014 with a value of IDR 320 trillion (USD $26.6 billion), or 6.1 percent of total market capitalization of the IDX (IDR 5,228 trillion). Despite tougher conditions in Indonesia’s financial sector (amid a higher interest rate environment) shares of BCA rose 36.7 percent in 2014.

Indonesia has been experiencing slowing economic growth since 2011 (when it recorded a GDP growth rate of 6.5 percent y/y). This development is caused by external factors (sluggish global demand causing falling commodity prices and capital outflows due to monetary tightening in the USA) and internal factors. Internally, Indonesia has been implementing economic reforms since 2013 (scrapping of energy subsidies) to relieve the government budget deficit. However, inflation accelerated sharply due to these structural reforms. In both 2013 and 2014 inflation was recorded at 8.4 percent (y/y). In a move to combat inflation (and limit capital outflows) Indonesia’s central bank (Bank Indonesia) gradually raised its key interest rate (BI rate) from 5.75 percent in June 2013 to 7.75 percent in November 2014 as well as targeting for slowing credit growth in Southeast Asia’s largest economy. This context (higher borrowing costs) is certainly not conducive for further expansion of Indonesian financial institutions. However, it did not manage to curb impressive growth of Bank Central Asia’s shares in 2014 as Indonesia is still in an early stage in terms of financial inclusion (meaning that many Indonesians still lack access to basic financial services). 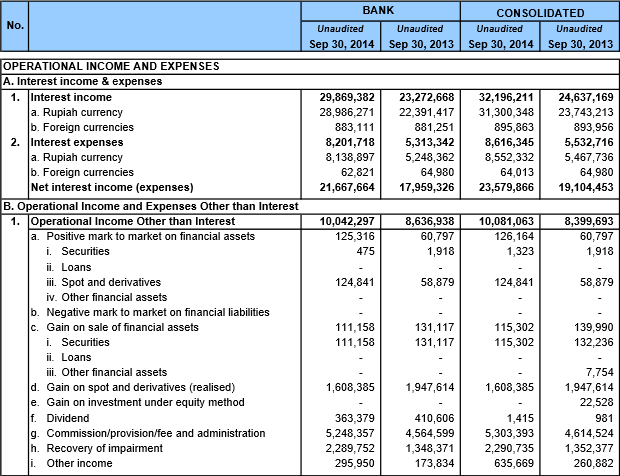 Meanwhile, the performance of shares of Indonesia’s second-largest company in terms of market capitalization, Astra International, was limited, growing 9.2 percent in 2014. About half of Astra’s profit is accounted for by the company’s car segment. As Indonesian car sales in 2014 are expected to be equal to car sales in 2013 (1.2 million vehicles) amid consumers’ weakening purchasing power (higher borrowing costs and higher fuel prices), the company has limited room for growth in this segment. Forecasts for Indonesia’s automotive sector in 2015 are bleak due to intensified competition in the car industry as well as higher labor costs. Amid weaker purchasing power it is difficult for the company to raise wholesale prices without jeopardizing sales figures (as many car parts are still imported using US dollar, the company therefore needs to absorb the negative impact of the depreciating rupiah). Meanwhile, other main business pillars of Astra (heavy equipment and palm oil) have also shown sluggish performance in 2014.