After having experienced overall weakening corporate earnings in 2015, Indonesia's largest companies saw rising net profit in full-year 2016 (in line with Indonesia's accelerating macroeconomic expansion last year). Of the ten biggest Indonesian companies (biggest in terms of largest market capitalization on the Indonesia Stock Exchange) only cigarette manufacturer Gudang Garam is yet to release its full-year 2016 financial results. The combined results of the other nine showed a marked improvement from the situation one year earlier.

It is worth taking a look at Indonesia's ten largest companies that are listed on the Indonesia Stock Exchange (IDX) because these ten companies account for 48 percent of the whole market (total market capitalization of the IDX was IDR 6,050 trillion at 24 March 2017). These publicly listed companies are therefore also the main blue chip stocks that are foreign investors' darling. These ten have a long history in Indonesia, solid fundamentals and a good track record in terms of financial and corporate management. Considering the promising macroeconomic context of Indonesia, there should be plenty of room for further growth in the years ahead.

Combined, the nine largest Indonesian companies listed on the IDX experienced a 7.89 percent year-on-year (y/y) jump in net profit over 2016 to IDR 133.8 trillion (approx. USD $10.1 billion), while their combined revenue rose 5.91 percent (y/y) to IDR 744.1 trillion over the same period. In the preceding year the overall net profit of these companies had contracted 4.33 percent (y/y), while their combined revenue grew at a slower pace (4.08 percent y/y).

These figures are in line with the performance of Indonesia's macro-economy. Whereas in 2015 Indonesia's gross domestic product (GDP) expanded 4.8 percent (y/y), implying the continuation of the nation's GDP growth slowdown, the nation's economic growth accelerated to 5.02 percent (y/y) in 2016 (effectively ending the macroeconomic slowdown that occurred between 2011 and 2015). Accelerating economic growth is expected to continue in 2017. Last week the World Bank released a report in which it put its forecast for Indonesia's 2017 GDP growth at 5.2 percent (y/y).

Most of Indonesia's biggest companies are active in the banking or consumer goods sectors (for an overview of each company's business click on the links in the table below). These are indeed the most promising sectors as the nation's huge population (258 million people) and its rapidly expanding middle class are a great (and growing) consumer force, while the banking sector is still underdeveloped due to relatively few Indonesians using banking services (something that is bound to change in the future).

The only company (among these top companies) that reported weakening net profit was Bank Mandiri. Due to an increase in provisions for bad loans this bank saw its net profit fall 32.1 percent (y/y) in 2016.

Regarding the performance of Indonesia's benchmark stock index (Jakarta Composite Index) in 2017 most analysts are optimistic that any external shocks (for example more Fed Funds Rate hikes or unexpected political or economic decisions made by US President Donald Trump) will be manageable due to Indonesia's strong macroeconomic fundamentals (although some short-term capital outflows are likely to occur). Most analysts see the Jakarta Composite Index rising to the range of 5,750 - 6,000 by the end of the year (from 5,567 on 24 March 2017).

If credit rating agency Standard & Poor's (S&P) will upgrade Indonesia's sovereign status to investment grade, then there could emerge significant capital inflows into Southeast Asia's largest economy later this year (particularly the blue chip stocks are expected to benefit in this case) as there are various funds that are only allowed to be invested in countries that obtained investment grade status from all three key credit rating agencies. Fitch Ratings and Moody's Investors Services have already assigned investment grade status to Indonesia. S&P, however, is still reluctant. However, recently there emerged some rumors that S&P may be willing to upgrade its view on Indonesia. 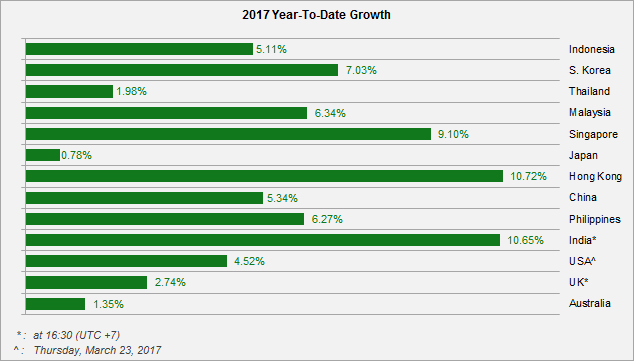