The trade balance of Indonesia is expected to show another deficit in November 2014 as oil and gas imports in combination with weak commodity exports continue to plague the balance. However, Executive Director at the Economic and Monetary Policy Department of Indonesia’s central bank (Bank Indonesia) Juda Agung said that the deficit will most likely turn into a surplus soon. Still, another monthly trade deficit implies that the country’s wide current account deficit has few chances to improve markedly at the year-end.

Indonesia's current account deficit is expected to ease slightly by the year-end to 3 percent of the country's gross domestic product (GDP). This deficit, which implies that the country is dependent on foreign inflows, makes Indonesia vulnerable ahead of looming higher US interest rates.

Indonesia’s trade balance has been affected by various matters in 2014. Most importantly are the implementation of the ban on exports of mineral ore (in January 2014), weak global demand for commodities, and costly oil imports. 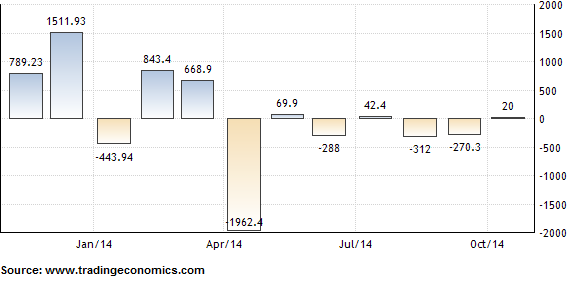 Although the mineral ore export ban - Law 4/2009 on Mineral and Coal Mining (Minerba) - was not implemented in full force yet (through renegotiations several major copper concentrate exporters such as Freeport Indonesia and Newmont Nusa Tenggara were allowed to resume exports in the second half of 2014) it reduced the volume and value of the country’s exports. On the long term, however, this ban should actually improve the trade balance after enough smelting facilities have been established in Southeast Asia’s largest economy and more value-added mining products can be exported.

Lastly, Indonesia’s trade balance is affected by a large deficit in the oil & gas sector (outperforming the surplus in the country’s non-oil & gas sector). The deficit in the oil & gas sector is primarily caused by costly oil imports. These oil imports are needed to meet ever increasing domestic fuel demand amid a structural period of economic growth (giving rise to industrialization and higher per capita car ownership). It will take time and investments before Indonesia can reduce the role of oil/diesel in the country’s energy mix (instead focusing on renewable sources or coal to fuel power plants) and therefore the easiest measure to curb oil imports is to reduce state spending on fuel subsidies. After a subsidized fuel price hike in June 2013 (by the Susilo Bambang Yudhoyono administration), the new Joko Widodo-led administration decided to raise prices for subsidized low-octane gasoline and diesel by more than 30 percent in November 2014 in a move to relieve pressures on the trade and current account deficits as well as to reallocate public spending from fuel consumption to more structural sectors in the context of economic and social development.

Forecast for Inflation in December 2014

The recent subsidized fuel price hike is positive for Indonesia’s long term fiscal fundamentals (and investor confidence) but also triggers a peak in inflation (for a period of three months) causing weakening purchasing power, a higher interest rate environment and slowing economic growth. Bank Indonesia expects that inflation will reach 2 percent (month-on-month) in December 2014 due to the fuel price hike and seasonal celebrations (Christmas and New Year). On a year-on-year basis, inflation will thus accelerate to about 8 percent at the year-end, slightly easing from last year’s 8.4 percent result.