Although consumer confidence among Indonesian consumers remained relatively high, there has been a decline detected in 2015. Consumer optimism has fallen as Indonesia’s economy is growing at its slowest pace in six years due to worldwide low commodity prices (giving rise to Indonesia’s weak export performance), China's economic slowdown, uneven recoveries in the US and Europe, while spending of the Indonesian government remained weak (amid bureaucratic hurdles and difficult land acquisition for projects).

Based on the Global Survey of Consumer Confidence and Spending Intentions, compiled by Nielsen, Indonesia’s consumer confidence fell three points to 120 in the second quarter of 2015 (from 123 points in the preceding quarter). This implies that Indonesia fell one spot to become the world’s third most optimistic nation in terms of consumer confidence. The Philippines overtook Indonesia's position in the latest ranking. India remained at the top position.

Agus Nurudin, Managing Director at Nielsen Indonesia, said Indonesia’s consumer confidence dropped due to the slowing economic growth trend of Southeast Asia’s largest economy. In the first quarter of 2015 Indonesia’s GDP growth slowed to a six-year low of 4.71 percent (y/y), whereas economic growth of the Philippines stood at 5.2 percent (y/y) in Q1-2015 (a three-year low and similar to Indonesia’s GDP result was below government and market expectations). 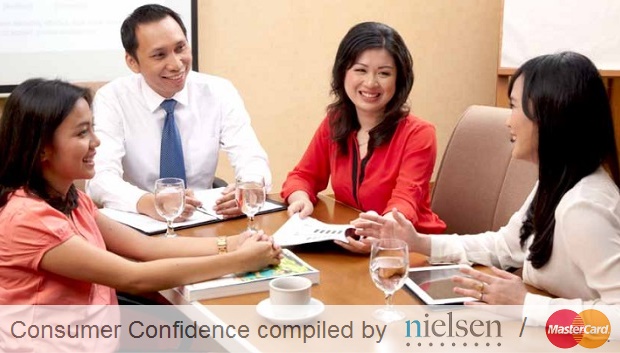 Nurudin detects a decrease in Indonesian consumer optimism especially regarding expectations about employment opportunities and personal finance. According to the survey, 68 percent of respondents believe that employment prospects for the year ahead are positive. However, this figure is six percent lower compared to the Q1-2015 survey. Eighty percent of respondents are confident about their personal financial condition in Q2-2015, down four percent from the first quarter this year.

Furthermore, Indonesian consumers are still optimistic about spending. About 53 percent of respondents stated that the next 12 months are a good time to buy products. However, this is three percent lower compared to the figure in the first quarter of 2015.

The Nielsen's Global Survey of Consumer Confidence and Spending Intentions was conducted between 11 and 29 May 2015 and used the information from 30,000 online consumers spread across 60 countries.

However, another survey painted a more negative picture of current consumer confidence in Indonesia. According to a MasterCard survey Indonesia’s consumer confidence experienced a 25.8 point plunge to 64.3 points in the first half of 2015 (compared to the same period last year), the weakest score in three years. This decline was the steepest decline among 17 markets in the Asian region. The MasterCard survey also tracks employment, income and quality of life.

According to Matthew Driver, Head of Global Products and Solutions in the Asia Pacific at MasterCard, Indonesian consumers (as well as domestic and foreign investors) have been disappointed at seeing the continuation of slowing economic growth during President Joko Widodo’s first year in the country’s driver’s seat.

Although being significantly less optimistic than last year, the MasterCard report indicated that the outlook for Indonesia remains optimistic compared with other markets in Asia.

Household consumption accounts for about 55 percent of the total Indonesian economy hence forming an important engine of growth.