It is a revision that is worth taking a closer look at. First, however, we need to go back to basics and answer the following question: what are these national strategic projects (abbreviated as NSPs) exactly?

NSPs, which were introduced under the administration of President Joko Widodo (via Presidential Regulation No. 3 of Year 2016), are capital-intensive infrastructure projects that are regarded strategic in the sense that they help to encourage national economic growth, equitable development, welfare, and regional development.

While private sector players are more than welcome to invest in these NSPs, it has so far primarily been the public sector players that act as the driving forces behind construction of the NSPs. The main reasons why private sector players are not overly enthusiastic to invest in these projects is because these projects are expensive (as they require large sums of money, for example because a large size of land has to be bought, such as in the case of toll roads) and they require quite some years before investors can expect to see profit (whereas typically investors want to be profitable within a 3-to-5-year time span).

Moreover, the bigger the project – and the longer it takes to complete the project – the bigger uncertainty becomes. For example because of excessive bureaucracy (red tape), especially in case more than one regional government is involved, or because of the threat of changing regulations (as we see quite some ad hoc policy-making in Indonesia instead of stable, long-term commitments).

Therefore, with private sector involvement being relatively limited, the majority of investment funds need to originate from somewhere else: the central government’s annual state budgets (APBN), the regional governments’ budgets (APBD), and from certain state-owned enterprises (SOEs), particularly those involved in construction, that are appointed to handle these NSP projects (with some of these SOEs obtaining a capital injection from the central government’s state budget to handle projects).

Meanwhile, the central government also wants to maximize the role of the Indonesia Investment Authority (INA) in NSP funding, both in the form of equity and loans. INA (which – being Indonesia's sovereign wealth fund – enjoys large funding capacity) has the potential to fund various NSP projects (with INA obtaining its funds and assets from the Indonesian government as well as through investment commitments from the large global institutional investors).

Lastly, what separates a NSP from other infrastructure projects is that all involved levels of government institutions (such as ministers, governors, and regents) need to treat the project as a priority project, and so regulations and licensing procedures are not allowed to obstruct progress of the project. In other words: all officials need to support the NSP project by facilitating its construction.

Take a glance inside the report here! (34 pages) 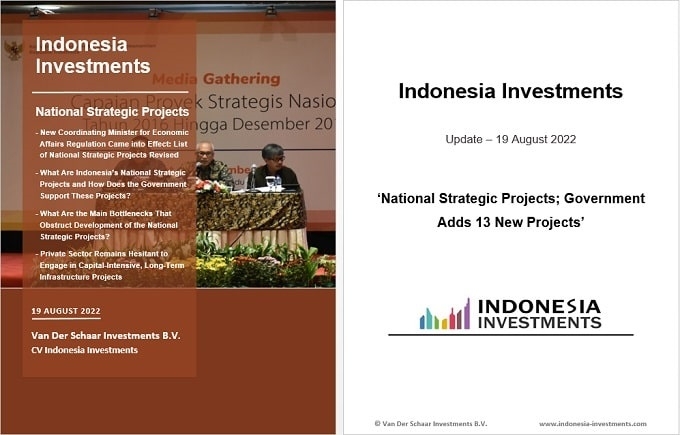