The Indonesian economy, from the expenditure side, is highly dominated by domestic demand. From Q1-2010 to Q1-2015, the average role of domestic demand reached 99.5 percent, with the lowest level at 96.8 percent. The positive side of this situation is that the Indonesian economy is relatively resilient to external factors. History shows that despite the US subprime mortgage crisis and financial crisis in Europe, economic growth in Indonesia remained relatively high and consistent compared to other countries.

Throughout Q1-2010 to Q1-2015 the Indonesia economy grew in the range of 4.71 to 6.76 percent (year-on-year), but with a tendency to slow down. During the same period, as a source of growth (SoG), household consumption grew in the range of 2.30 percent to 3.18 percent, but with an accelerating trend (see figure 1), touching its highest point in Q1-2015 (2.75 percent). This means that in the first quarter of 2015 when economic growth stood at 4.71 percent (y/y), household consumption accounted for 58.3 percent of total economic growth. 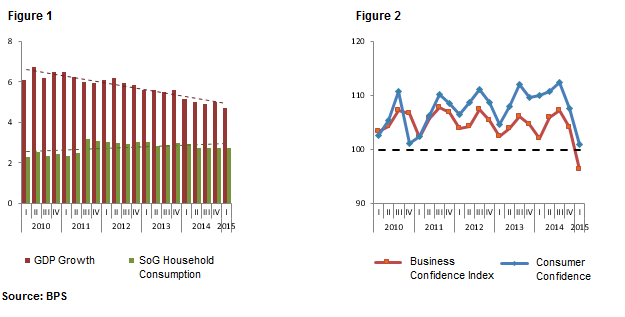 The extent to which household consumption structurally influences Indonesian GDP growth is determined by several factors such as the size of the population, population growth and the age structure, changing culture (lifestyle), and the pace of economic growth.

Official data compiled by the Ministry of National Development Planning (Bappenas), Statistics Indonesia (BPS), United Nations Population Fund (UNFPA), as well as estimates of demographers show that the population of Indonesia numbered 238.5 million in 2010 and is projected to accelerate to 305.7 million by 2035. As such, Indonesia has the fourth-largest population in the world, after China, India, and the United States.

These data also show that Indonesia has a demographic bonus, meaning that - in terms of age structure - the composition of the Indonesian population is dominated by those of the age between 15-64 years. Being a young population is an advantage for the economy as it implies that there is sufficient labor for the production sector to produce goods and services. Moreover, this demographic bonus also provides potential customers for these produced goods and services as a population in the economically active age generally has a higher demand and higher purchasing power than an inactive population.

Another factor that structurally influences household consumption is changing culture (or lifestyle) due to technological development and urbanization. The development of technology has driven an increase in the variety of goods and services produced, while the increasing number of people living in urban areas has prompted changes to people's lifestyles. In 2010, the urban population of Indonesia stood at 49.8 percent. This figure is continuously rising and by 2035 may reach 66.6 percent.

The most prevalent example is that in the old days people were more likely to buy raw materials and process these themselves at home, whereas today people tend to purchase ready-made (instant) products. Another example is that in the old days local communities mutually helped each other voluntarily to achieve economic transactions. Examples of these are diverse and include haircuts, massages, repairing/building a house, and other services. Today, however, almost all these needs are met by (paid) professional services. This cultural shift causes that the value of household consumption increases as the transaction is evaluated and demand carries a multiplier effect in the economy.