Industrial estate developer Puradelta Lestari, unit of Singapore-listed Sinarmas Land Ltd, was listed on the Indonesia Stock Exchange (IDX) on Friday (29/05) thus becoming the fifth firm to go public on the IDX in 2015. Through the initial public offering (IPO) Puradelta Lestari raised IDR 1 trillion (USD $76 million) by offering 4.8 billion shares to the public, equivalent to ten percent of the company’s enlarged capital, for a price of IDR 210 per share. On the first trading day, shares of the company rose 4.29 percent.

Puradelta Lestari, established in 1993, is the developer of Kota Deltamas in Cikarang (West Java), located some 40 kilometers east of Jakarta. This is one of the largest examples of integrated industrial estate development in the Greater Jakarta region. Deltamas, a 3,049 hectare-sized estate, involves industrial development (47 percent), commercial development (25 percent) and residential development (28 percent).

The main business activities of the company are the construction of housing (complete with supporting facilities), house shops including supporting infrastructure, and the selling and renting of these properties. In addition, Puradelta Lestari is also engaged in the development and utilization of industrial zones and supporting facilities. 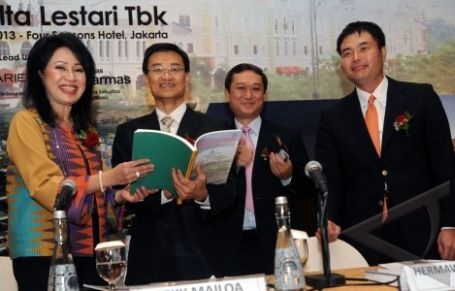 Prior to the IPO, shares of Puradelta Lestari were held by AFP International Capital Pte. Ltd. (45.97 percent), Fame Bridge Investments Ltd (25.00 percent), Sojitz Corporation (25.00 percent), Jermina Limited (2.74 percent), and Sumber Arusmulia (1.29 percent). The Sinarmas Group has a major influence as it directly controls 100 percent of the shares of AFP International Capital Pte. Ltd., and, indirectly, 100 percent of the shares of Jermina Limited and Sumber Arusmulia.

IPOs on the Indonesia Stock Exchange up to 29 May 2015