Indonesia posted a USD $709.4 million trade surplus in January 2015 according to the latest data from Statistics Indonesia (BPS) released on Monday (16/02). Although the surplus is higher than expected and thus has a positive impact on the country’s trade and current account balances, the data also indicated that exports fell 8.09 percent year-on-year (y/y) to USD $13.30 billion signalling continued weakening global demand for Indonesian exports. Meanwhile, Indonesian imports shrank by 15.6 percent (y/y) to USD $12.59 billion.

As such, the USD $709.4 million trade surplus of Indonesia in January 2015 was particularly caused by a decline in imports. Declining imports are partly caused by the sharp fall of global oil prices (Indonesia being a net oil importer). Oil & gas imports in January fell 40.42 percent (!) from one year earlier. However, concern as emerged as slumping imports may also signal weakness of consumption in Southeast Asia’s largest economy (which would be a sign of slowing economic activity). Imports of consumer goods declined 20.25 percent (!) from January 2014. The 15.6 percent (y/y) drop in imports was much deeper than expected. Analysts expected a 6 percent (y/y) fall in imports in the first month of the year. 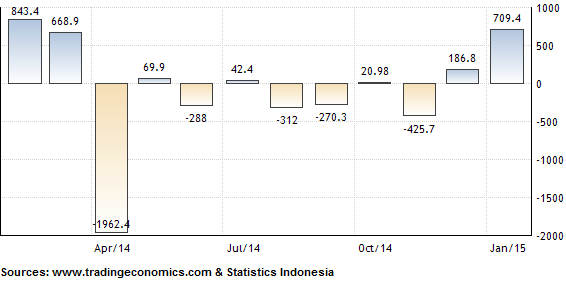 The economy of Indonesia expanded 5.02 percent (y/y) in 2014, the slowest growth pace in five years. This economic slowdown is mainly caused by weak exports and slowing investment growth. Amid a sluggish global economy, demand for commodities has weakened hence resulting in low commodity prices. Indonesia, an important (mainly raw) commodity exporter, immediately feels the impact of lower commodity prices. Meanwhile, exports of unprocessed minerals have been banned (although under certain conditions shipments are allowed) by the Indonesian government (2009 Mining Law) since January 2014. Moreover, growth of investment realization in Indonesia has slowed in 2014 due to the political year (Indonesia organized legislative and presidential elections in 2014). Being a young democracy, chances are bigger that Indonesia will experience political instability during these elections. The market was particularly concerned about the popularity of controversial presidential candidate Prabowo Subianto, who - in the end - was narrowly defeated by market favourite Joko Widodo. Meanwhile, private consumption in Indonesia (the main pillar of economic growth in Indonesia as it accounts for about 55 percent of total economic growth) slowed amid the higher interest rate environment. The central bank of Indonesia (Bank Indonesia) raised its benchmark interest rate (BI rate) to 7.75 percent in November 2014 after President Widodo decided to reform the country’s subsidized fuel price policy in a move to raise funds for economic and social development.